You may have heard some of the buzz about a new result concerning the direct detection of dark matter particles in an underground laboratory. The buzz originates from a new paper by the DAMA/LIBRA collaboration; David Harris links to powerpoint slides from Rita Bernabei, leader of the experiment, from her talk at a meeting in Venice. The new experiment is an upgrade from a previous version of DAMA, which had already been on record as having recorded a statistically significant signal of the form you would expect from the collision of weakly interacting massive particles (WIMP's) with the detector. The experiment uses a challenging technique, in which their focus is not on eliminating all possible backgrounds so as to isolate the dark-matter signal, but to look at the annual modulation in that signal that would presumably be caused by the Earth's orbital motion through the cloud of dark matter in the Solar System: you expect more events when we are moving with a high velocity into the dark-matter wind. Other workers in the field have not been shy about expressing skepticism, but the DAMA team has stood their ground; as Jennifer notes in her report from the recent APS Meeting, the DAMA collaboration home page currently features a quote from Kipling: "If you can bear to hear the truth you've spoken/ twisted by knaves to make a trap for fools,/ ...............you'll be a Man my son!" 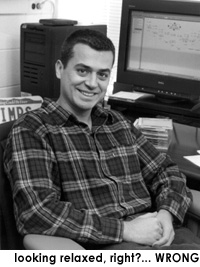 To help provide some insight and context, we've solicited the help of a true expert in the field -- Juan Collar of the University of Chicago. I got to know Juan back in my days as a Midwesterner, and a trip to his bustling underground experimental empire was always a highlight of anyone's visit to the UofC physics department. You can hear him talk about his own work in this colloquium at Fermilab; he's agreed to post for us about his views on the new DAMA result, and more general thoughts on what it takes to search for 25% of the universe. I promise you won't be bored. ------------------------------------------------------------------- My dear friend Sean has me blogging: hey, I’ll try anything once. On the subject of the recent DAMA results no less, as per his request. I am normally a bit of a curmudgeon but... Sean, you really want the worst of me out there permanently on the internets, don’t you? I’ll try to keep this to the point. A bard I am not, nor the subject invites any poetry. I have therefore chosen brief eruptions of flatulence as the metric and style for this piece. The result of indigestion, you see. I’ll start with the most negative, so as to end up on a brighter note:

Intermezzo and change of guard: I would hate for anyone to tell me what to do with my experiments. Apologies, milady.

Well Sean, you made me do it, and I am exhausted. How can you guys blog every other day? People are dying in them blog sweatshops, now I am sure of this.