Giving Hallmark a Run for its Money with Cosmic Valentines

If you <3 the cosmos, it'll <3 you back. These are all astronomical objects shaped like valentines. 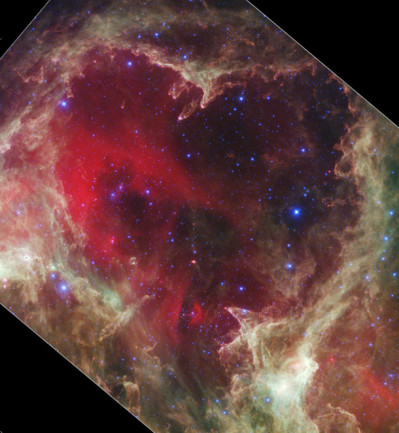 Happy Valentine's Day from Spitzer Space Telescope! This image is of a region called W5, part of a bigger complex of gas and dust shining 6000 light years away in the constellation of Cassiopeia. The resemblance to a Valentine is remarkable!

What you're actually seeing here is an enormous star-forming factory 150 light years across. Deep in its (haha) heart massive, hot, and bright stars are being born. When they switch on for the first time, they blast out a flood of ultraviolet light as well as a fierce wind of subatomic particles. These eat away at the cloud from the inside-out, forming an enormous cavity. It's the edges of this cavity that form the cosmic valentine.

[Note: a slightly different view of this cloud is later in the gallery. Also, my apologies to Debbie Harry for the title of this image.] 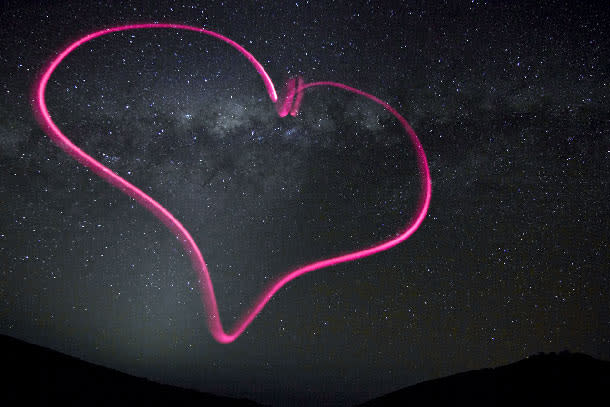 hotographer Julien Girard took this picture of the Milky Way looming over the Paranal observatory in Chile, home of the

Very Large Telescope. During the 25 second exposure, he stepped into the field of view and used a small flashlight to express his love of astrophotography. 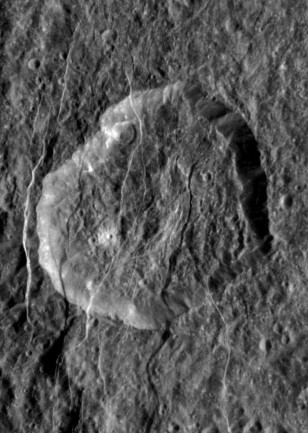 We've seen several features on the Moon and Mars shaped like hearts, but this one is a little bit different; it's on Saturn's moon Rhea, a ball of ice and rock about half the size of our Moon. This Valentine feature is a few kilometers across... and what cracks me up about it is the presence of a ridge and small crater inside it, making it look as if it's winking at us! 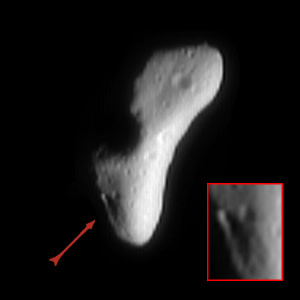 I'm a big fan of cool coincidences, especially of the astronomical kind. And this one is simply too funny.

On February 14, 2000 - yes, on Valentine's Day! - the space mission called Near-Earth Asteroid Rendezvous (or NEAR) entered into orbit around the asteroid named 433 Eros. This spud-shaped rock is 34 x 11 x 11 km (21 x 7 x 7 miles) in size, and sometimes approaches near the Earth (though we are in no danger from it for a long, long time, like millions of years).

As NEAR approached Eros, it snapped this shot of a feature at one end (I inset a zoomed-in picture on the lower right). It's actually three separate craters, lit by the Sun in just such a way as to resemble... well, you know.

And while it's a funny coincidence that NEAR went into orbit on Valentine's Day, it may be an even better one that Eros itself is named after the Greek god of love. Well, um, physical love, but you get the meaning. 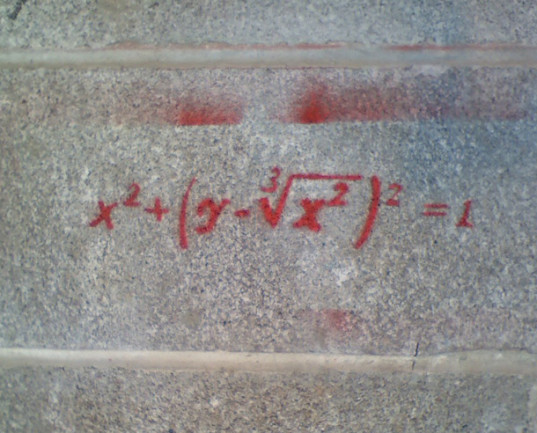 I have to leave you with this, somewhat enigmatic, picture. It was a bit of graffiti spotted on a college campus. The photographer went to the social networking site reddit to ask what it meant... and got the answer (some NSFW language there).

If you want to see what this equation represents, then go to the Wolfram Alpha site, give it a sec to calculate, then look for the graph labeled "Implicit Plot". You'll see which one I mean pretty easily. :) 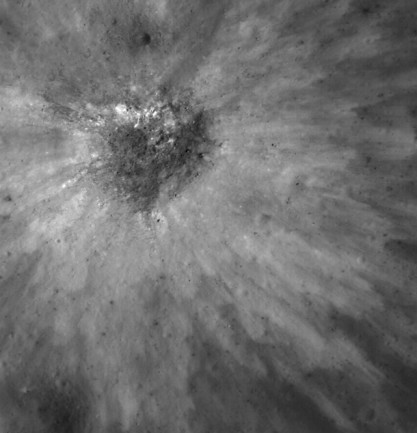 This amazing picture is a close-up of our own Moon's surface, taken by the Lunar Reconnaissance Orbiter. This crater, located near the Moon's equator, is about 120 meters across.

It's unclear how this crater got its cardiacally-defined shape. But what's even cooler to me is the beautiful and intricate pattern to the material ejected from the impact. It's likely that the original surface was a thin layer of dark material over some that was brighter. When the impact occured (probably by a rock the size of your local flower shop), the light material was excavated out, and the plumes fell in a radial pattern for nearly a kilometer around the crater.

What was left is something we see eons later as what looks for all the world - or worlds - like a glowing heart. 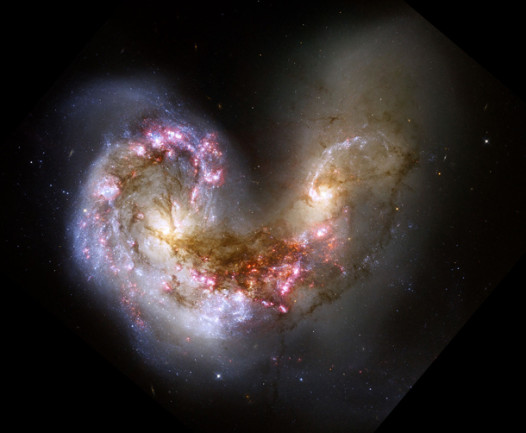 I know some folks with big hearts, but they don't even come close to the Antennae Galaxies: two colliding galaxies 45 million light years away, and tens of thousands of light years across!

These were probably two normal spiral galaxies, not too much different than our own Milky Way, which started colliding millions of years ago. Their combined gravity twisted and distorted their shape into what we see today.

Individual stars are too small to physically smack into each other, but giant clouds of dust and gas are much bigger targets. When they collide at these speeds (hundreds of km/sec!) they compress, collapse, and undergo a burst of star formation. All those pinkish clumps you see in this pictures are where thousands, perhaps millions, of stars are being born.

Eventually the galaxies will combine, the two melding into one bigger galaxy. A metaphor for Valentine's Day? Well, no, since the merger will be a vast chaotic realm of high-energy outbursts, massive turbulence, and an unpredictable future. 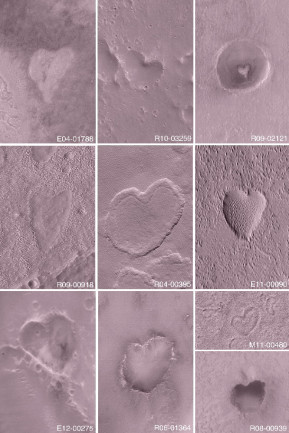 In general, I would've thought valentine-shaped features on other planets would be rare, but that's because I'm a cold-hearted, calculating scientist. Turns out I'd be wrong, as this collage of pictures from the Mars Global Surveyor show.

These are all mesas (raised eroded features) or depressions on Mars. My favorite has to be the perfectly-shaped, light-colored tiny heart mesa at the bottom of the crater in picture R09-02121 at the upper right. It's just adorable... even though it's roughly the same size as a football stadium, and the event that formed it was an explosion similar to that of a nuclear bomb! 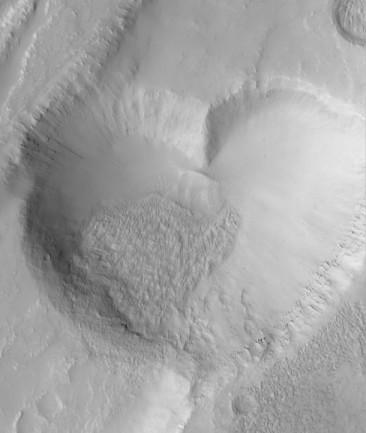 This may be the finest example of a heart-shaped formation on any planet! It's actually not a crater, but a collapsed pit. It formed inside a long trough called a graben, features that themselves form along fault lines.

This unnamed pit is about 2.3 km (1.4 miles) across at its widest point, and the image was captured by the Mars Orbiter Camera onboard Mars Global Surveyor. The pit appears to have quite a bit of sand and other windblown loose debris on its floor.

If you look at the top left lobe, you can see a meandering darker streak with a boulder at the left end; it looks like the rock must have rolled across the slope there, leaving that trail behind. If this is some kind of metaphor to a wandering path to love there, I leave it to you to find it. 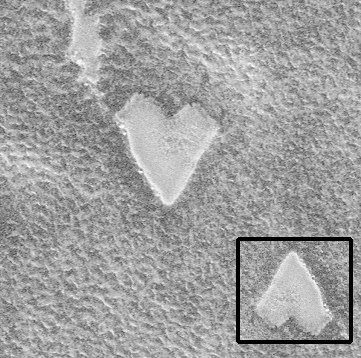 In late 1999, while imaging areas near the south pole of Mars, the Mars Orbiter Camera spied this interesting and familiar formation. You might be forgiven thinking this is a pit or collapsed structure. In fact, it's a mesa, 250 meters across, raised above the ground!

This is due to a well-known illusion; our brains are used to seeing things lit from above, but in this image the heart is being lit from below, confusing our sense of depth. I took the image, flipped it over, and inset it on the lower right. Does that look more like a raised flat region to you? 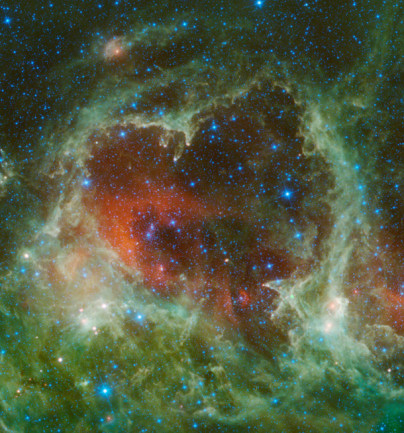 As promised, here is another image of the W5 star-forming region (as seen by Spitzer in the earlier shot), this time taken by the Wide-field Infrared Survey Explorer (WISE). This mission scanned the entire sky in the infrared, looking at galaxies, asteroids, cool stars, and yes, clouds of gas and dust.

The colors tell you a bit about what you're looking at: blue and cyan are from hotter sources like stars, while green and red are from warm dust. In fact, the green is coming mostly from long-chain organic molecules called Polycyclic Aromatic Hydrocarbons: smelly soot!

Well, you know what they say: love stinks. 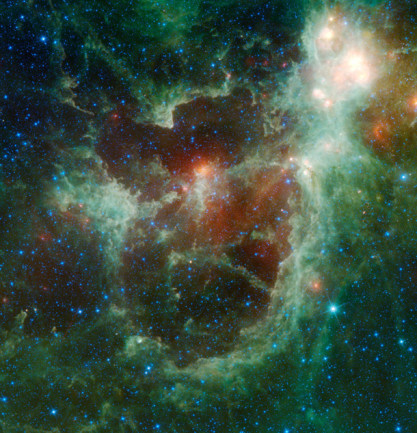 The previous picture was of a Valentine-shaped cloud taken by WISE. However, that's only one part of a vastly larger complex of gas and dust called IC 1805. Right next to the Valentine (well, in cosmic terms, it's actually a couple of hundred light years away) is another star-forming region, another giant cavity carved by the winds from mighty stars.

But, in a fit of galactic irony, this particular cavity is shaped more like an actual human heart! You can even get a hint of the chambers inside it. Together, these two objects are colloquially called the Heart and Soul nebulae... and this one is the heart. 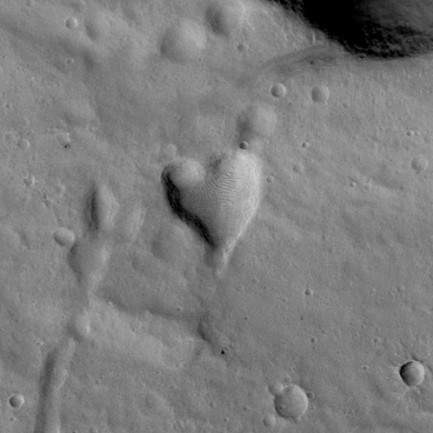 This beautiful heart is located nearly on the equator of Mars, and is about 2 km (1.2 miles) long. The picture was taken by the Mars Reconnaissance Orbiter.

Like most valentine-shaped features on Mars, this is a collapsed pit - you can see the ripple of sand dunes in the upper right part of the heart. It may have formed when water just under the surface was catastrophically released as a huge flash flood, causing the surface above it to slump... and given the shape of the pit, I'll try to avoid any "tears of joy" analogy.