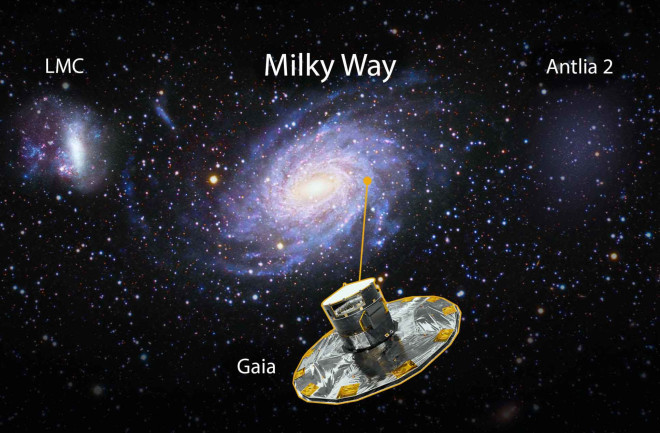 The Ant 2 "ghost" galaxy is a large, dim dwarf galaxy that scientists have discovered near the edge of the Milky Way. While low in mass, Ant 2 is about the same size as the Large Magellanic Cloud (LMC). (Credit: V. Belokurov and A. Smith (Cambridge, UK and CCA, New York, US) based on the images by Marcus and Gail Davies and Robert Gendler)

An international team of astronomers can’t fully explain the “ghost” galaxy that they discovered about 425,000 light-years away from Earth.

This galaxy, named Antlia 2 (or Ant 2), is described as a “ghost” because of how strangely dim it is. Ant 2 is rather large for a dwarf galaxy – it’s about the same size as the 7,000 light-year-wide Large Magellanic Cloud (LMC), which is the Milky Way’s largest satellite galaxy. Yet it’s 4,000 times fainter than the LMC. So Ant 2 gives off very little light. The researchers also found that Ant 2 has an unexpectedly low mass for its large size, according to a statement.

The research team thinks that this low mass stems from Ant 2 being torn apart by the Milky Way’s gravitational field, co-author Sergey Koposov from Carnegie Mellon University said in the statement. “What remains unexplained, however, is the object’s giant size. Normally, as galaxies lose mass to the Milky Way’s tides, they shrink, not grow,” Koposov said.

Adding to its strange qualities, Ant 2 has gone undetected until now because of its low density and “hiding spot” behind the Milky Way’s bright disk. But a dedicated research team has managed to spot Ant 2 by venturing deep into the data collected by the European Space Agency’s Gaia satellite, which has so far observed nearly 1.7 billion stars.

The team searched through Gaia data looking for Milky Way satellite galaxies by searching for RR Lyrae stars. RR Lyrae stars are old, metal-poor stars that have been found in every known dwarf satellite, according to the statement. So, unsurprisingly, the team was able to find Ant 2 by its RR Lyrae. Still, while the galaxy does have the expected RR Lyrae, it’s enormous size and low mass remain puzzling.

“Compared to the rest of the 60 or so Milky Way satellites, Ant 2 is an oddball,” co-author Matthew Walker, also from Carnegie Mellon University, said in the statement. “We are wondering whether this galaxy is just the tip of an iceberg, and the Milky Way is surrounded by a large population of nearly invisible dwarfs similar to this one.”

The researchers suggest, according to the statement, that perhaps, because Ant 2 is so wildly different from other dwarf galaxies that we’ve discovered, there may be holes in our understanding of how dwarf galaxies form. The team continues to search through the Gaia data for other “ghost” galaxies like Ant 2 to hopefully answer such questions about galaxies like this.

Editor’s Note: An earlier version of this story incorrectly stated the dwarf galaxy is 130,000 light-years away from the edge of the Milky Way. The object is actually 130,000 parsecs away, or 425,000 light-years, from Earth.