Gargantuan Explosions Rock the Sun, Launching a "Cannibal" Cloud of Gas Toward Earth

Not to worry! This is completely normal, and the "cannibal" could trigger beautiful northern lights. 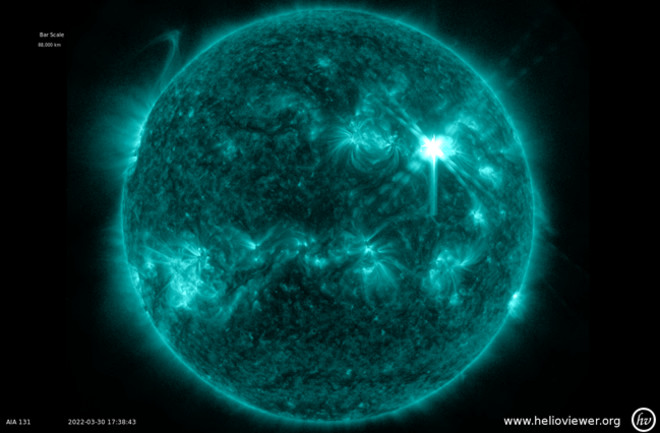 The Sun unleashed an X-class solar flare — the most intense kind — on Wednesday, March 30, 2022, as seen here in an image from NASA's Solar Dynamics Observatory spacecraft. Eruptions of gas associated with flares that exploded two days earlier may bring beautiful northern lights displays late on March 30th and early on the 31st. (Credit: Helioviewer)

The Sun is getting downright ornery!

Since Monday, March 28th, the Sun has unleashed 17 or more solar flares — incredibly intense bursts of radiation arising from the explosive releases of magnetic energy. The most recent occurred today, peaking at 1:35 p.m. ET (17:35 UTC), according to NOAA's Space Weather Prediction Center. It was a super-powerful X-class flare, the most intense kind.

Solar flares are the largest explosive events in our solar system.

This animation consists of images acquired by NASA’s Solar Dynamics Observatory spacecraft on March 30, 2022. It shows an intense solar flare erupting from the Sun, visible as a bright flash toward the top-right. The colorized images show the Sun in extreme ultraviolet light, highlighting the extremely hot material in flares. (Credit: NASA)

A series of less intense flares occurred on Monday. These were accompanied by the ejection of two massive clouds of superheated gas threaded with magnetic fields.

Moving at about 2 million miles per hour, the second of these coronal mass ejections has been overtaking and merging with the first one, creating what scientists call a "cannibal CME."

And the cannibal is headed directly toward Earth. This has prompted the space weather center to issue a strong geomagnetic storm watch.

Should it happen, this major disturbance to our planet's protective magnetic bubble, called the magnetosphere, may result in beautiful displays of the northern lights across a large swath of North America. The auororal displays could reach as far south as Oregon, Iowa, Ohio, New York and Massachussetts late on Wednesday night into early Thursday.

A series of solar flares erupted from the Sun on Monday, March 28, 2022, as seen in this animation of extreme ultraviolet images acquired by NASA's Solar Dynamics Observatory spacecraft. The animation pauses during a few of these M-class flares. Temperatures in solar flares can reach 18 million degrees F or more. (Credit: Helioviewer. Animation: Tom Yulsman)

The Sun's activity waxes and wanes in a cycle that lasts about 11 years. Scientists track that activity by monitoring the number of sunspots. These dark blotches are frequently associated with solar flares, coronal mass ejections, and other forms of dynamic activity.

In December of 2019, solar activity bottomed out, marking the end of Solar Cycle 24 and ushering in Solar Cycle 25. Since then, activity has been ramping up.

This week, we've gotten a dramatic demonstration of what that looks like! And it will only get more more intense.

The cycle is expected to reach a crescendo in 2025. At that point, the Sun's entire magnetic field will flip, with the north and south magnetic poles switching. Then activity will begin to wane once again.