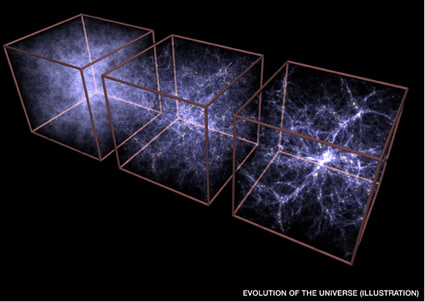 The mysterious force known as dark energy that is causing the universe’s expansion to accelerate is also preventing galaxy clusters from getting too big for their britches, a new study suggests. The existence of dark energy was first proposed a decade ago but the stuff has never been directly detected, and there's much we don't know about it. However, all the indirect studies have agreed that it acts like a kind of anti-gravity: A

repulsive force that permeates empty space and, bizarrely, grows stronger with distance, precisely the opposite of what happens with gravity [Washington Post].

After bulking up rapidly in the first 10 billion years of cosmic time, clusters of galaxies, the cloudlike swarms that are the largest conglomerations of matter in the universe, have grown anemically or not at all during the last five billion years, like sullen teenagers who suddenly refuse to eat. “This result could be explained as arrested development of the universe” [The New York Times]

, said lead researcher Alexey Vikhlinin. He says the findings support the idea that the gravity of the clusters drew in more and more matter for billions of years during their growth spurts. But gravity's alter ego, dark energy, was tugging at the edges of the clusters, pulling matter away from the galaxies and stalling growth. The results, which will be published in The Astrophysical Journal, are seen as another confirmation that dark matter exists. They also

strengthen the suspicion — but do not prove — that dark energy is the result of a weird antigravity called the cosmological constant that was hypothesized and then abandoned by Albert Einstein as a “blunder” almost a century ago [The New York Times].

Einstein's idea of the cosmological constant didn't work mathematically, but evidence is gathering for his basic idea that some anti-gravity force must pervade empty space to keep the universe from collapsing through the force of its own gravity. DISCOVER's crack astronomy and physics bloggers have much more on this finding, including what it means for the ultimate fate of the universe and some nifty graphs. Related Content: Bad Astronomy: NEWS: Dark energy stunts your growth Cosmic Variance: Dark Energy: No Longer a Surprise 80beats: Caught in the Act: Dark Energy Expanding the UniverseImage: MPE/V. Springel