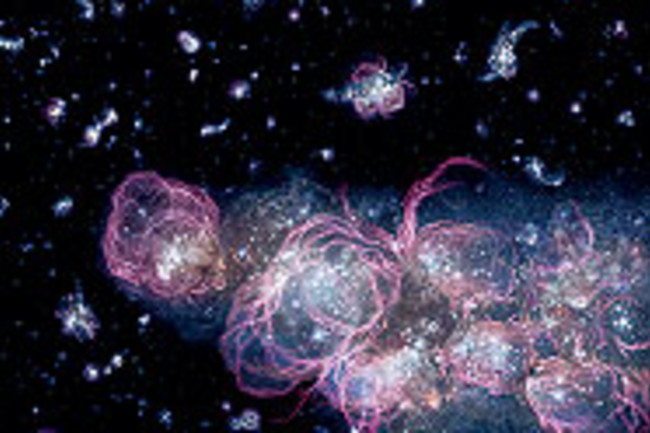 Until recently, studying newborn galaxies meant peering far into the distance and deep into the past, to the edge of the known universe. But with the 2003 launch of NASA’s orbiting ultraviolet telescope, Galaxy Evolution Explorer, or Galex, things have changed. Now astronomers can see objects that were previously invisible, especially new galaxies that blaze in the ultraviolet part of the spectrum.

Galex has quickly proved its worth. Astronomers recently found a nursery full of infant galaxies—but more important, all 36 are nearby. “It gives astronomers the chance to study the process of galaxy birth up close and personal,” says Tim Heckman of Johns Hopkins University.

The Milky Way, like most of the starry pinwheels in our neighborhood, is around 10 billion years old. But the new galaxies were all born only 100 million to a billion years ago. “These appear to be the newborn versions of typical ‘adult’ galaxies like our Milky Way,” Heckman says. “It’s almost like looking out a window and seeing a dinosaur walking by.”

Astronomers now plan to examine the newborns in detail with other instruments, such as the Hubble Space Telescope. This may help solve such mysteries as how gas clouds are triggered to form new stars and when the massive black hole at the center of every mature galaxy forms.