From a Cosmic Perspective, Is Life on Earth Premature? 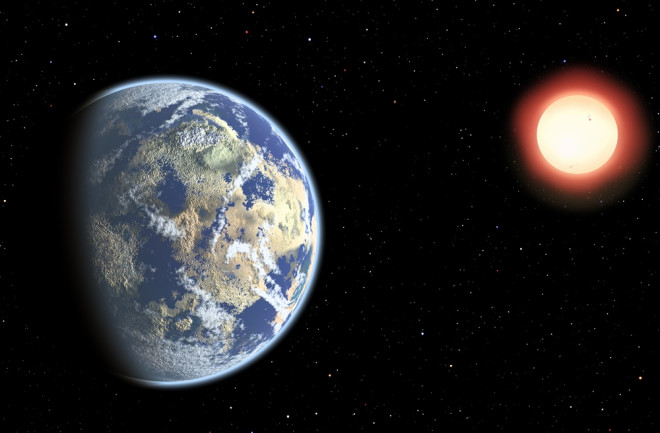 An artist's interpretation of a red dwarf star orbited by potentially habitable planets. (Credit: Christine Pulliam/CfA) In universal timescales, our solar system has only been around for a small portion of time as the universe is 13.8 billion years old while the Earth is just 4.5 billion years old. It is thought that there could be life out in the universe that developed billions of years before we did, but a new study predicts that life on Earth is premature. In a new study to be published in the Journal of Cosmology and Astroparticle Physics, Avi Loeb, the lead author of the study from the Harvard-Smithsonian Center for Astrophysics, and his team find that life evolved here earlier than it should have. “If you ask, ‘When is life most likely to emerge?’ you might naively say, ‘Now,’” says Avi Loeb in a press release. “But we find that the chance of life grows much higher in the distant future.” Nearly 30 million years after the Big Bang, the first stars arose and populated the universe with essential elements such as carbon and oxygen. Conversely, in about 10 trillion years the last stars with slowly fade away and die. Loeb and his team looked at the likeliness of life starting between both of these boundaries. The main factor ended up being the lifetimes of stars. As the more massive stars have a shorter lifetime, stars that are around three times more massive than the Sun will die before life has the chance to even begin. The stars that are less than 10 percent the mass of the Sun will continue to glow for 10 trillion years supplying more than enough time for life to emerge on its planets. The probability of life grows over time, meaning that the chances of life are 1,000 times higher in the future than right now. “So then you may ask, why aren’t we living in the future next to a low-mass star?” says Loeb. “One possibility is we’re premature. Another possibility is that the environment around a low-mass star is hazardous to life.” Even though low-mass stars will live long lives, they also have some unique hazards. When they are young, the stars' emit very strong and potentially dangerous flares and ultraviolet radiation that might strip the atmosphere from any potentially habitable world. The next step to uncovering which theory is correct is to study nearby red dwarf stars and their orbiting planets to look for the potential for habitability. Future space missions such as the James Webb Space Telescope (JWST) and the Transiting Exoplanet Survey Satellite (TESS) should provide insight into answering these questions.