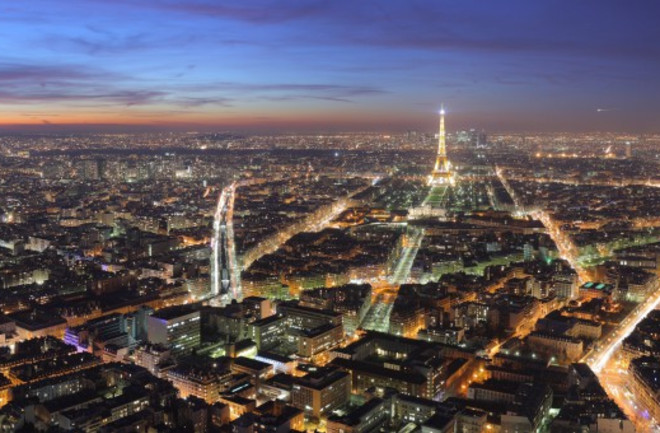 The city of Paris at night. By 2040, all oil exploration and production in France will end. Wikimedia Commons. Today, Emmanuel Macron, the current president of France, announced that his country would no longer allow for oil exploration in its territory and by 2040, all oil extraction in France would be ended. Now, at first, you might be tempted to say this is merely symbolic as France isn't exactly an huge oil producer, but you'd be wrong. France does have some significant oil resources that will now be locked in the ground for the sake of not adding more carbon dioxide to the Earth's atmosphere. France is putting its marbles into energy sources that won't contribute as much to the increasing greenhouse gases being emitted by burning fossil fuels. So, where is all this French oil? It is locked in shale that lies with the Paris Basin. It isn't oil that is very easy to access -- what's know as "shale oil" that requires hydraulic fracturing (a.k.a., "fracking") to extract. The Paris Basin may hold upwards of 222 million barrels of unconventional oil along with over 2 trillion cubic feet of unconventional gas according to the U.S. Geological Survey. This means that the oil and gas is there, but requires more than the usual "drill and suck" methods to get it out of the ground (that is, fracking required). Some estimates put the unconventional oil at over 5 billion barrels! Now, considering that that oil is trading today (December 20, 2017) at ~$54/barrel, that could be between $11 billion and $270 billion of liquid hydrocarbon in the ground. France currently imports about 40 million barrels per year, so the Paris Basin oil could cover 5 to over 100 years of imports depending on who's number for the oil reserves you believe. UPDATE: The ban also includes French overseas territories, like French Guiana that may have off-shore oil (but so far nothing has been successful) and islands in the Mozambique Channel that are being explored ... and possibly more near other territories. France is home to an oil company that produced $127 billion of revenue in 2016 - Total. French territories were increasingly becoming a smaller piece of their puzzle when it comes to finding resources. In fact, this year the company signed a deal with the Iranian government worth $5 billion to develop natural gas fields (against U.S. wishes), so Total is clearly looking elsewhere to continue to extract hydrocarbons. If this sound familiar, it is because the Paris Basin isn't too different than the Bakken Shale in North Dakota. It has more potential oil (over 7 billion barrels) than the Paris Basin, but the much of the oil and gas are in shales that don't have a lot of ability to let that oil and gas out (low permeability and porosity), so fracturing is required to get those resources out. The U.S. has greatly increased oil and gas production in North Dakota to try to exploit these resources to create American energy independence - so much so, that the infrastructure is visible from space at night. However, France's move is very much one to try to do three things: (1) create energy independence for France; (b) combat the emissions of carbon dioxide that is driving climate change and (c) improve air quality in the cities of France. The country has already banned gasoline/Diesel engines by 2040, so this new step of banning oil production goes hand in hand. France will try to transition its much of its economy to run on renewable energy like wind, hydroelectric and solar by 2023 according to a plan announced last November. Currently, much of France's power is generated via nuclear power plants (over 70%) while fossil fuels are only 8.6% of the energy pie. However, much of the oil used goes to transportation, so the biggest transition will likely be from gas/diesel vehicles to electric that can be powered by the overall French energy grid. France is quickly becoming a world leader to transitioning from fossil fuel energy to a renewable (or nuclear, but that's a whole other story) energy. Now, they're putting they money where their mouth is quite literally - keeping the hydrocarbons under the feet down there so that we won't add even more carbon dioxide to the atmosphere. This is an ever-increasing challenges thanks to current US policy, but where we shirk our global duties, the rest of the world may have to help pick up the slack - and likely help their countries become truly energy independent in the process.