FOXSI Flights Could Reveal Why the Sun's Corona Is So Hot 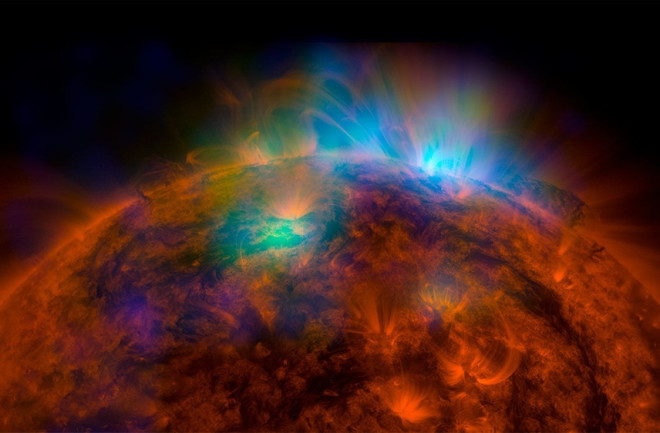 Shown here in X-rays, the Sun’s surface bubbles with activity as solar flares burst forth, spewing fountains of plasma outward. (Credit: NASA/JPL-Caltect/GSFC) You have probably heard of solar flares before. These bright eruptions from the Sun’s surface are triggered when knotted magnetic field lines within the Sun suddenly snap and reconnect, accelerating fireballs of plasma outward to distances up to 35 times the diameter of the Earth. But have you ever heard of nanoflares? In a study published yesterday in Nature Astronomy, a team of researchers led by Shin-nosuke Ishikawa of the Japan Aerospace Exploration Agency (JAXA) presented evidence that relatively small explosions called “nanoflares” may be responsible for the mysteriously extreme temperatures found in the Sun’s corona. The solar corona — the outermost layer of hazy plasma surrounding the Sun that can be viewed during a total solar eclipse — has baffled astronomers for nearly 150 years. While the Sun’s surface only reaches around 5,500 kelvins, the corona can reach staggering temperatures of several million kelvins (1 million kelvins = 1.8 million Fahrenheit). In order to make their observations, the scientists launched a rocket called the Focusing Optics X-ray Solar Imager (FOXSI) into space for 15 minutes so that seven X-ray telescopes could observe the Sun. The observations captured high-energy light from one region of the Sun that corresponded to temperatures of over 10 million kelvins. Most interestingly, this region contained no obvious (full-size) solar flares, meaning they could not be responsible for the sweltering heat. Furthermore, if the coronal heat source were uniform and constant, as some alternative theories suggest, the plasma would not reach these tremendous temperatures. To account for the concentrated and powerful coronal heating they did observe, the team proposed a mechanism whereby many small, intense nanoflares crop up and dissipate quickly, creating pockets of extremely hot plasma. Unfortunately, detecting these relatively faint nanoflares is exceptionally challenging and beyond our current capabilities. The researchers hope that the next FOXSI flight, slated for August 2018, will hint at more dense, hot pockets of plasma within the Sun’s corona, strengthening the case for nanoflare heating. In the meantime, the team is focused on incorporating nanoflares into coronal models, hopefully bringing theory in line with observation.