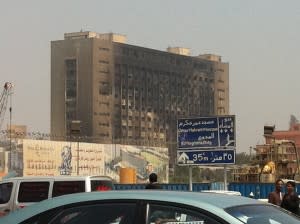 I'm back in the U.S.--a tad disoriented, but back. Jon and Jamie have done a great job blogging in my absence, and today I will seek to get back in the swing. It will be slightly hard, though, as I'm still taking in my first experience of the Middle East. Doha, Qatar reminded me a lot of Las Vegas, only hotter and much less interested in its visitors having fun (e.g., it is nearly impossible to find a beer there unless you are at an American hotel). You spend your time inside consuming vast amounts of air conditioning, and trying to imagine just how much water it takes to fuel the artificial lawns outside the window. The thing that most struck me was the oxymoron (no longer) of standing outside in a hot wind. The more amazing experience was post-revolution Cairo. Many foreign tourists are unreasonably terrified of the place--due in part to media coverage of riots and protests--and their absence has damaged the economy. In fact, it's a very safe place to visit--unless, perhaps, you deliberately stand in the middle of a protest in Tahrir Square (my picture above is of a burned building there). And the people are wonderful--even when they're pushing you to buy something, a phenomenon we encountered in a rather extreme form, since we were among the few tourists around. 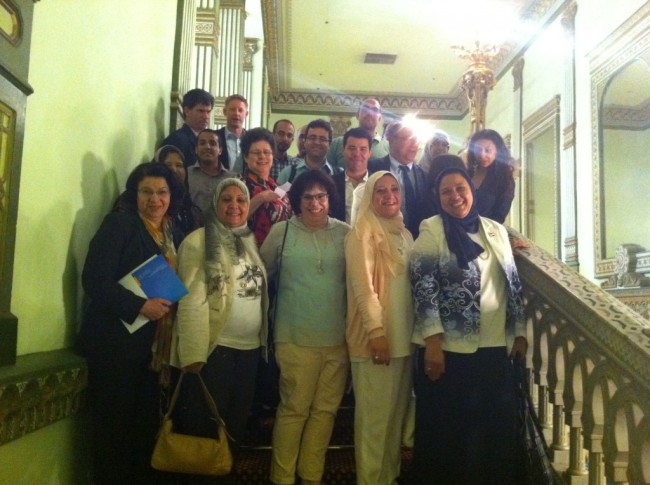 We were there--myself and science journalists Deborah Blum, David Dobbs, Beryl Lieff Benderly and Curtis Brainard--for a workshop, sponsored by the U.S. Embassy in Cairo, with our Egyptian media counterparts. We went in wrongly assuming that they were more focused on politics and didn't know a great deal about science journalism, and were very surprised--the participants were quite sophisticated about the challenges of our field and very dedicated to covering public health and the environment (the Nile Delta, in particular, is greatly threatened by sea level rise). The result was a wonderful exchange that I hope can continue--as frankly, I had at least as much to learn from them as they had to learn from me. In the meantime, we have to watch Egypt closely as the search for post-revolution stability moves forward--and hope that science and research will play a central role in a long-term economic recovery. Caltech Nobel Laureate chemist Ahmed Zewail (sometimes mentioned as a possibility for Egypt's first Democratic president) has founded a "Science City" to that end--a project that was endorsed by the Mubarak government but has only gotten traction since the Revolution. I sincerely hope this mega-initiative succeeds: It's precisely the kind of innovation that will set the groundwork for a future democratic, and economically progressive Egypt.