Fossils on Mars? If They Exist, NASA's Mars 2020 Rover has a Shot at Finding Them

A recent study suggests the landing site for NASA's next Mars rover holds minerals that often preserve fossils on Earth. 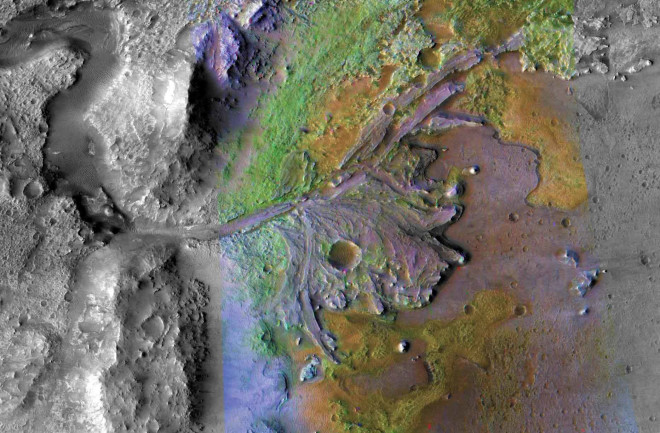 Scientists have found another reason to look forward to NASA's next Mars rover mission. A spacecraft orbiting Mars recently spotted clear signs that the landing site for NASA’s Mars 2020 rover — Jezero Crater — is home to hydrated silica, a mineral that’s particularly good at preserving signs of life. That could make the landing site a good place to preserve fossils on Mars.

The rover mission will help researchers figure out how the minerals formed and start probing them for signs of life. And a team of scientists is already proposing several ideas for how the minerals came to be in Jezero Crater. The researchers describe their findings in a study published in November in the journal Geophysical Research Letters.

Silica is a crystalline structure made of silicon and oxygen that can be found in quartz, glass and sand. Hydrated silica holds water within its crystal structure. On Earth, hydrated silica can form in a variety of environments, like in volcanic glass and on the ocean floor.

Read More: Scientists Gear Up to Look For Fossils on Mars

Hydrated silica is one of the hardest known materials other than diamond and resists weathering from wind and water. That means it’s very good at preserving softer materials that find their way inside.

“The oldest evidence — definitive evidence — of microfossils that we have on Earth are usually found in silica,” said Jesse Tarnas, a planetary scientist at Brown University and one of the authors of the paper.

The researchers found evidence for hydrated silica in Jezero Crater when data from the Mars Reconnaissance Orbiter spacecraft matched up with similar measurements taken of hydrated silica in the lab. Once the rover lands in 2021, scientists will be able to study the minerals up close and figure out how they formed — and whether they might contain signs of past life.

Jezero Crater was once home to rivers that carved a delta into the planet’s surface. It’s possible that the hydrated silica formed in these deltas, Tarnas said. Other possibilities are that it formed in volcanoes or rocks upriver, and that wind or water carried it into the delta. Some of these scenarios are more promising for preserving signs of life than others.

The Mars 2020 rover is scheduled to launch in July 2020 and land on Mars in February 2021. Once it’s there, the rover's instruments can carefully analyze the chemistry of the hydrated silica and surrounding rocks. These observations will let scientists figure out how the hydrated silica formed and if they contain complex organic molecules.

If the rover’s on-site analysis looks promising, it can pack samples that a future Mars mission could try to bring back. Scientists would likely need to study the samples in person, Tarnas said, to confirm or deny whether they contain signs of life.