This is just a quick followup to the news of the naked-eye GRB from a few days ago. I've been getting email and seeing things popping up in other astroblogs, so I figured I'd chime in. I want to mention that given the distance and brightness of the burst, it is most likely the single most luminous event ever witnessed by humans. I think that's somethin' right there. 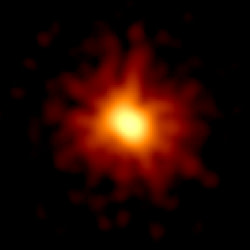 NASA issued a press release, and pretty quickly, which is good. I'm not surprised: it was written by my old friend Bob Naeye, who works for NASA public outreach at Goddard Space Flight Center. Bob has written and/or edited for every major astronomy magazine in this country, it seems like, and he was my editor for a couple of years with Astronomy magazine. To this day he is one of if not the finest editor I've ever had. Plus he's just a nice guy. :-) The image above is from Swift: it was taken by the X-Ray Telescope on board the satellite mere minutes after the burst was detected. Having seen a few Swift X-ray images, let me say that that sucker was bright. Very cool. In news from the ground: Pi of the Sky is a GRB hunting robotic telescope in Poland, and it has great images and animations of the GRB seen as it was on the rise, even as Swift was detecting the gamma rays. This is a very cool idea: telescopes on the ground with very wide fields of view look at the same part of the sky at the same time as Swift. Remember, Swift is a satellite in low Earth orbit, and it sees a large portion of the sky at once. When gamma rays from a GRB are detected by Swift, it immediately (in a few seconds!) sends down the rough coordinates of the burst so other telescopes can observe it as quickly as possible -- many GRBs fade to invisibility in seconds. So a telescope looking at the same part of the sky as Swift cuts down even those precious seconds, getting the burst simultaneously in optical light as Swift sees the gamma-rays. In this case, it paid off incredibly: they caught the burst actually getting brighter, which is rare all by itself. But to have that happen with a burst of this distinction, well, that's a major coup. Hats off to the astronomy folks in Poland for getting this. Of course, they gave us Copernicus, so they have a long history in ground-breaking astronomy. Reports are pouring in from all over the world (and I mean all over and above it), and at the moment it's mostly technical data: brightness, spectra, and so on. I suspect in the next few days a more coherent picture of this burst will emerge, but it will get better when it fades enough to look for the host galaxy -- the galaxy in which the burst occurred. Sometimes the galaxy can be seen well enough to show that the burst came from a place in it where stars are actively being born. That implies this was a young supermassive star that exploded, the kind that doesn't live long enough to wander out from its stellar nursery. Spectra of the galaxy can give an idea of the chemical content of it, how much of elements like iron and calcium can be seen, hinting again at physical conditions in the galaxy. Like I said last time, we still have big questions about these titanic events, and the more images and spectra we have, and the more brains we have looking at them, the better.