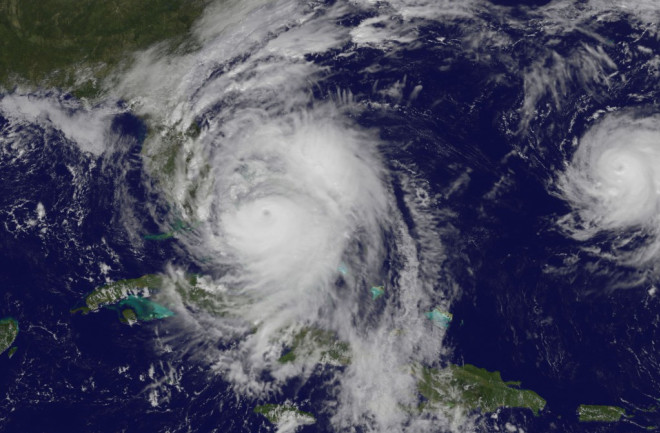 Hurricane Matthew is barreling toward Florida, and will likely slam into the Space Coast around 6am Friday morning. (Credit: NASA/NOAA GOES Project) This morning, when Hurricane Matthew updates showed up on my local news, I had a very selfish mentality. The approaching hurricane is interesting from a weather standpoint, but I wasn’t too concerned. I mentally checked through my list of family and friends; none of them are directly in harm's way. And so, I let out a sigh of relief. Until a few hours later, when it dawned on me that the most important location for space exploration is in Hurricane Matthew’s crosshairs. The eye of the hurricane is estimated to hit NASA’s Kennedy Space Center and Cape Canaveral at 6am Friday morning. NASA's Kennedy Space Center is home to the following:

As of the time of this writing, Hurricane Matthew is a category 4 story. Tropical-storm force winds are expected around midnight local time, with hurricane-force winds hitting around 6am Friday morning. The current forecast calls for 125 mph winds with gusts up to 150 mph. (For more about Hurricane Matthew, check out the ImaGeo blog.) According to the Kennedy Space Center blog, a “hurricane ride-out” team of 116 people is onsite and will stay at various locations at the center through the hurricane. “During the storm they will report any significant events to the Emergency Operations Center, located in the Launch Control Center at Complex 39,” wrote Brian Dunbar. “They can also take any action needed to stabilize the situation and keep the facility secure.” The next planned NASA launch, a cargo delivery to the International Space Station, is still scheduled for October 13, but that will lift off from NASA’s Wallops Flight Facility in Virginia. The next Florida launch is scheduled for November 4, and that spacecraft is currently housed in nearby Titusville, Florida. Perhaps ironically, it’s a weather satellite, and part of the geostationary spacecraft network that observes hurricanes. The Space Coast is crucial to both the government’s space-related activities plus the private space exploration industry. If the current projections hold, Hurricane Matthew’s impact could be felt long after the winds die down.