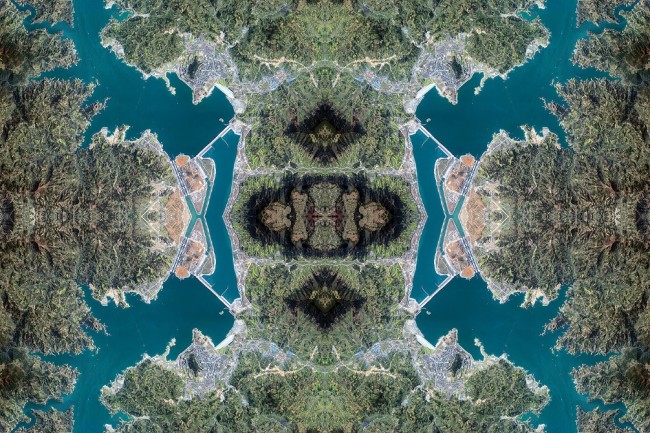 Artist David Thomas Smith created this image by making a mosaic of satellite images of China’s Three Gorges Dam and surroundings, creating a kind of remote-sensing inkblot. Can you find the dam? (Image: Courtesy David Thomas Smith) Welcome to the inaugural post of ImaGeo, a visual blog focusing on the intersection of imagery, imagination and Earth. ImaGeo will focus on spectacular visuals related to the science of our planet, with an emphasis (although not an exclusive one) on the unfolding Anthropocene Epoch. Its focal point will be on imagery — from remote sensing, to computer simulations, to photography (some of it my own). But ImaGeo will also feature explanation and interpretation. Its mission will be to provide a compelling visual experience, and a deeper understanding of our planet’s natural systems, how Earth has evolved, and how it continues to change, most especially under our influence. The image at the top of this post is by David Thomas Smith, an artist whose works have been exhibited around the world. It is a mosaic of pictures of China’s Three Gorges Dam, and surroundings, arranged in a kind of digital Rorschach ink-blot.

As Smith describes his work:

Composited from thousands of digital files drawn from aerial views taken from internet satellite images, this work reflects upon the complex structures that make up the centres of global capitalism, transforming the aerial landscapes of sites associated with industries such as oil, precious metals, consumer culture information and excess. Thousands of seemingly insignificant coded pieces of information are sewn together like knots in a rug to reveal a grander spectacle.

Please have a look at more of Smith’s compelling images by going here: http://cargocollective.com/dtsmith/Anthropocene The water impounded by Three Gorges Dam, the world’s largest hydroelectric installation, weights some 86 trillion pounds. NASA scientists have calculated that raising that much mass behind the dam is enough to change the Earth’s inertia in such a way as to increase the length of the day (albeit by only 0.06 microseconds). It’s also sufficient to make the Earth slightly more round in the middle, and to shift the position of the poles by eight tenths of an inch. Those effects may be small, but they are also symbolic of the Anthropocene. This is the idea that we humans are having such a pervasive and profound effect on our planet’s life support systems that we have become a geologic force equivalent to meteorite impacts, colliding continents, and massive volcanic outpourings. In recognition of this, scientists are considering whether to officially recognize the dawn of the Anthropocene Epoch, which would mean that this term would “join the Cambrian, Jurassic, Pleistocene, and other such units on the Geological Time Scale,” as Paul Crutzen and his co-authors put it in an article a few years ago. The evidence for the scale of our impact is pretty compelling:

Put all of these impacts together, and there is one simple conclusion, White says: “We’re big. We’re really big.” Which is, of course, just another way of expressing the central concept of the Anthropocene. These and other facts about our impact on the planet suggest that we may live too large — that humanity as a whole already exceeds the biosphere’s ability to meet human demands for food, materials, and waste disposal. That’s obviously a controversial statement, and proving it is no easy matter. Suffice it to say that researchers are trying. The Global Ecological Footprint Network has tallied up the numbers and concludes that we humans exceed Earth’s “biocapacity” by about 50 percent. Another way of looking at it is that we are using the equivalent of 1.5 planets to meet our resource needs and absorb our waste. But of course we’ve only got one planet, Earth. So if you believe these numbers, we’re in a situation called “ecological overshoot.” The rapid felling of forests, depletion of fisheries, and dwindling fresh water reserves all serve as evidence for this view, as does the inexorable buildup of carbon dioxide in the atmosphere. Of course, critics dismiss ideas like this as doomsday thinking that has been proved wrong time and again. I personally think these critics are wrong — we do see evidence that burgeoning human population and per capita consumption is running up against limits. But the point of bringing up the concept of the Anthropocene in this first post is not to suggest that the end-of-days are nigh and we should lose all hope. We’re an amazingly resourceful and adaptable species. In fact, that’s how we got to be so big, as it were. So my goal here is to help people recognize a discomfiting but ultimately empowering fact: We don’t stand apart from nature; we are a veritable force of nature. With this knowledge, perhaps we can make some intelligent decisions about what we want to do with our power (a point my friend and fellow Discover blogger Keith Kloor made recently). We have a choice about whether we want to use it in a way that is sustainable over the long run. Will we make that choice? In the coming weeks and months, ImaGeo will deal with these, and many, many other issues — and all with an emphasis on the visual. I hope you will enjoy it.