Flares Erupt from An Active Region on the Sun 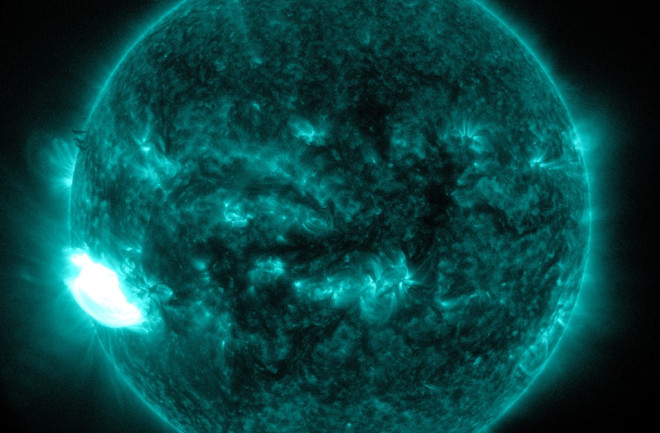 A solar flare erupts in this image captured by NASA's SDO spacecraft on Oct. 19, 2014. (Source: NASA/SDO) The Sun has been acting up lately, producing one powerful X-class flare and several more moderate flares over the past 72 hours. You can see the X-class flare exploding off the lower left aspect of the Sun in the false-color image above, which was captured by NASA's Solar Dynamics Observatory in the extreme ultraviolet wavelength of 131 Angstroms. This wavelength is ideal for seeing the intense heat of a flare. Earth's atmosphere and magnetic field protect us from solar eruptions that are pointed at us, but satellite operations can suffer varying degrees of disruption and even damage. And if an eruption is large enough, the results can be much, much worse. With the rise of solar activity over the past few days, minor geomagnetic storms may have occurred, according to the Space Weather Prediction Center. These are capable of producing weak fluctuations in power grids.

A cluster of sunspots marks the active region on the Sun that has produced several flares. (Source: NASA/SDO) The flaring activity over the past few days has come from an active region on the Sun marked by the sunspots in the image above, also captured by SDO. It's labeled Active Region AR2192, and it's almost the size of Jupiter. The Sun's magnetic field is much stronger in sunspots than in surrounding areas (and is thousands of times stronger than Earth's field). Most solar flares and massive explosions of material (called coronal mass ejections) occur in the magnetically active areas around sunspot clusters.