Five Things All College Students Should Know About the Earth 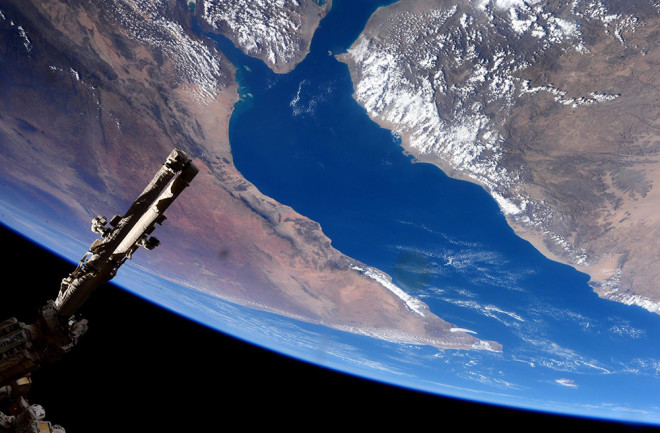 The Horn of Africa seen from the International Space Station in January 2015, taken by ESA astronaut Samantha Cristoforetti. NASA. So, another school year starts Thursday (for me) and I thought I'd offer a list of 5 things all college students should know about the Earth, whether they take a geology classes or not (but you really should take at least one). #1 The Earth is 4.54 billion years old (give or take a few million years) This is "long history". About 4.54 billion years ago, the Earth was formed out of the pile of debris and gases that surrounded our just-born Sun. How do we know this? By determining the age of meteorites that match the composition of the early solar system using the isotopes produced by radioactive decay. We can find some evidence of the first minerals produced in the early Earth by dating zircon at the Jack Hills in Australia, and they reach back to about 4.4 billion years ago. Modern Homo sapiens have only been around for a whopping 0.004% of the history of our planet. #2 Rocks record the evidence of evolution of life on Earth Speaking of when Homo sapiens arrived on the scene, the rocks of Earth contain all the evidence for evolution as the driving mechanism for the diversity of life on Earth. Since life appeared ~3.8 billion years ago, rocks have been capturing a long (and somewhat incomplete) record of organisms that existed on land and in the seas. It is this "long history" that is needed to really appreciate how life has changed to meet the demands of a changing planet. #3 Inside the Earth, rocks melts (but not for the reason you think)

Lava fountaining from fissure 8 on Kīlauea's lower East Rift Zone in June 2018. USGS/HVO. We know that rocks melt. The eruption in Hawaii this past summer is evidence enough that molten rocks reach the Earth's surface. However, many people think that rocks melt inside the Earth because it is hot down there (and it is!) ... but that's not the case in most places. Instead, rocks are melting because they are great insulators, so they keep their heat from deep within the Earth as they rise. The trick is that the melting point of rock goes down as the pressure goes down, so hot rock will melt as they rise. Secondly, when water trapped in rocks is released as they heat up in the Earth, that water can lower the melting point of rock kind of like salt does for ice. This means rock that wouldn't normally melt does. The former is the source of lava in places like Hawaii and Iceland while the latter drives volcanism in the Andes or Cascades. #4 Speaking of which, the interior of the Earth is not molten (except for one layer) All that being said about melting rocks, the inside of the Earth is not one big molten pool on which continents are floating. Instead, the mantle -- the layer directly below the Earth's crust -- is a flowing solid that is hot and convecting. The outer core of the Earth is liquid, but instead of liquid rock (magma), it is liquid iron and nickel metal. This layer moves around, which forms the Earth's magnetic field. However, if you go down even deeper, the Earth becomes solid again because the high pressure of the Earth's core means that the iron and nickel exist as a solid again. #5 The surface of the Earth is always changing

The Franklin Mountains in Texas. Wikimedia Commons. As James Burke of the famed series Connections would say, the only constant on Earth is change. The surface of the Earth is dynamic and over the planet's long history, not only has the surface experienced weathering and erosion caused by the Earth's water and atmosphere, but the whole surface has changed. This is thanks to plate tectonics, where the continents and oceanic plates move around over hundreds of millions of years, reshaping the look of the planet from one with one massive supercontinent to today's more spread out version. Mountain ranges go up and come down, ocean basins open and close, glaciers rampage over the land and then retreat. Something new is always happening. #6 (Yes, a bonus) The Earth's climate changes, but this time it is our fault Finally, the Earth's climate -- the long-term record of the planet's surface conditions -- is also changing, just like the surface of the Earth itself. These changes have been going on for billions of years due to influences like the orbit and tilt of the planet, impacts of comets or asteroids, massive volcanic eruptions, the evolution of life and a myriad of other factors. However, the rapid change we are experiencing today is due to the direct impact of humans releasing massive amounts of carbon dioxide into the atmosphere through the burning of fossil fuels. The planet has survived climate change before, but the life on Earth doesn't always fare so well. There you go, six things everyone should know about geology. There is much more you can discover, so do yourself a favor and take some geology, read some books and get to know the planet that we all live.