The Milky Way is filled with planets. Now astronomers have found the first candidate planet in another galaxy. 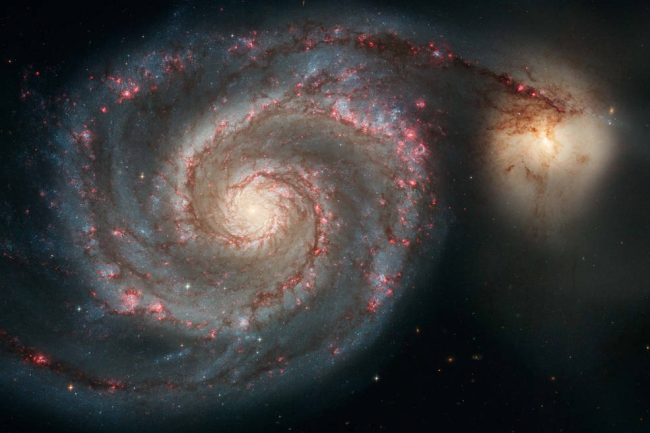 Since the first detection of the first exoplanet in 1992, astronomers have found thousands of others. Indeed, they estimate that the Milky Way is home to 40 billion worlds.

So it’s easy to imagine that planets must be common in other galaxies, particularly those that seem similar to our own. But when it comes to spotting these planets, there is a problem.

Other galaxies are so far away and the stars crammed into such a small region of space, as seen from Earth, that it is hard to identify individual ones let alone the effects of any planets around them. So extragalactic planets have sadly eluded astronomers.

Now Rosanne Di Stefano at the Harvard-Smithsonian Center for Astrophysics along with several colleagues, say they have found a candidate planet in the M51 Whirlpool Galaxy some 23 million light years from Earth near the constellation of Ursa Major. This alien world, christened M51-ULS-1b, is probably slightly smaller than Saturn and orbits a binary system at a distance of perhaps ten times Earth’s distance from the Sun.

The observation was possible because of a special set of conditions. The planet’s host binary system consists of a neutron star or black hole which is devouring a massive nearby star at a huge rate. The infall of stardust releases huge amounts of energy, making this system one of brightest sources of X-rays in the entire Whirlpool Galaxy. Indeed, its X-ray luminosity is roughly a million times brighter than the entire output of the Sun at all wavelengths.

Hugely bright x-rays sources are rare and sparsely distributed throughout the Whirlpool Galaxy. That means they are easy to isolate against the backdrop of ordinary stars.

And the source of these X-rays — the black hole or neutron star — is tiny. That means a Saturn-sized planet orbiting a billion kilometers away can completely eclipse the X-ray source, should it pass directly in front in the line of sight with Earth.

On Sep. 20, 2012, that’s exactly what appears to have happened. Fortuitously, the orbiting Chandra X-ray Observatory was watching at the time. The X-ray source dimmed to nothing and then reappeared, the entire transit lasting about 3 hours.

At the time, nobody noticed because the data sets from Chandra weren’t being searched for such short variations. But when Di Stefano and colleagues looked, the tell tale signs were clear to see.

There are various reasons why an X-ray source can dim in this way. One is the presence of another small star, such as a white dwarf, that eclipses the X-ray source. The team says M51-ULS-1b cannot be a white dwarf or other type of star because the binary system is too young for such an object to have evolved nearby.

Another potential explanation is natural variation, perhaps because of an interruption to the material falling into the black hole or neutron star. Di Stefano and co say in these cases, the luminosity changes in a characteristic way, with higher energy light frequencies changing more quickly than lower energy ones, and switching back on in a different way.

But in this case, all the light frequencies dimmed and reappeared at the same time, suggesting an eclipse. “It is approximately symmetric, and has a shape typical of transits in which the source and transiting object have comparable size,” they say.

Now that the first planet candidate in another galaxy has emerged, Di Stefano and co say others are likely to be found quickly. The team scoured just a portion of the X-ray data from Chandra to find this new planet candidate.

There is plenty more where that data came from. “The archives contain enough data to conduct surveys comparable to ours more than ten times over,” say the team. “We therefore anticipate the discovery of more than a dozen additional extragalactic candidate planets in wide orbits.” And more data is being gathered all the time.

So while M51-ULS-1b may be the first candidate planet discovered in another galaxy, it is unlikely to be the last. Just watch this space.