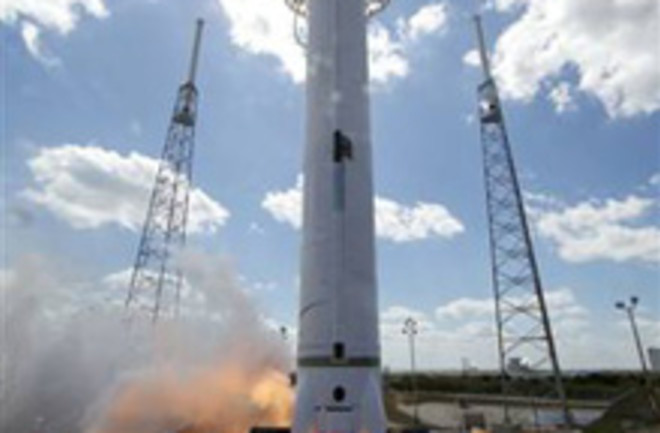 Elon Musk's Falcon 9 rocket didn't get off the ground this weekend, but that doesn't mean there isn't cause for excitement. Musk's company SpaceX completed a successful test-fire of the rocket's engines, paving the way for a possible real launch in less than a month.

. Success came on the second try for SpaceX. The company's first attempt came last Tuesday, but launch technicians aborted with two seconds to go. Now the company has passed the hot fire test, and it says the real Falcon 9 launch could happen as early as April 12. However, the accomplishment won't come easy: SpaceX's previous rocket, the Falcon 1, took four attempts before it achieved complete success. Lots of people are already counting on Falcon 9.

The 154-foot-tall rocket is the cornerstone of SpaceX's efforts to design, build and launch new vehicles to carry pressurized cargo, and perhaps astronauts, to the International Space Station [MSNBC]

. SpaceX already holds more than $1 billion in NASA contracts to execute Falcon 9 flights, and Musk's firm is one of the leading candidates to fulfill President Barack Obama's plan to have private companies carry NASA astronauts to low Earth orbit and perhaps beyond. Also today, SpaceX announced it entered into an agreement with Space Systems/Loral to put satellites into orbit as early as 2012. Musk is as confident as ever:

With its FAA license to launch granted last week, SpaceX is just awaiting clearance from the Air Force for Falcon 9's emergency abort system, which would be used to terminate the launch if the rocket strayed from its projected fight path and threatened populated areas. "As soon as the tests are complete and (Air Force) has signed off, we will launch," said Musk [ABC News]