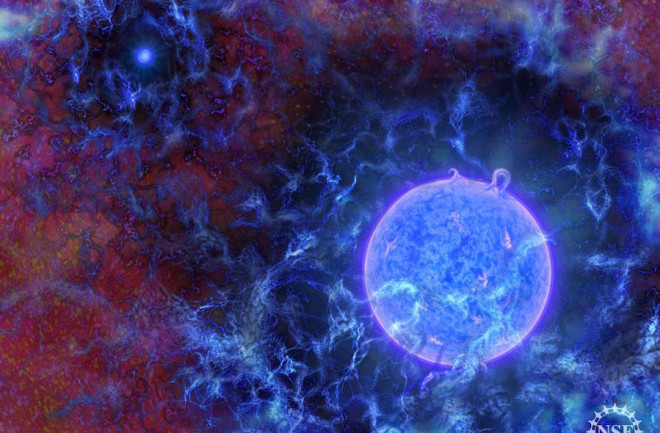 This artist concept shows one of the universe’s first stars. The massive blue star is embedded within filaments of gas and dust, while the cosmic microwave background (CMB) is shown on the outer edges. Researchers recently inferred the existence of these massive blue stars by measuring the dimming of the CMB. (Credit: N. R. Fuller/National Science Foundation) When solving a crime, detectives don’t always have access to footage or photographs of their suspect. Instead, the detectives have to painstakingly search for small, easily overlooked clues — such as fingerprints. Like detectives, astronomers don’t always have the option of simply examining an image when they want to solve a mystery. Instead, astronomers usually must meticulously piece together tiny bits of evidence, often by scouring the heavens to hunt for clues. And one of the biggest cosmic cold cases that astronomers have been attempting to solve for years is: When exactly did the first stars form? This week in the journal Nature, after over a decade of intense experimental investigation, a team of astronomers announced that they have finally cracked the case of the first stars. Using a simple radio antenna the size of a tabletop located in the Australian desert, the researchers discovered the faint fingerprints of the earliest stars in the infant universe, which formed when the cosmos was just 180 million years old. “This is exciting because it is the first look into a particularly important period in the universe, when the first stars and galaxies were beginning to form,” said Colin Lonsdale, director of MIT’s Haystack Observatory, in a press release. “This is the first time anybody’s had any direct observational data from the epoch.

Based on the study, astronomers have updated the timeline of the universe to reflect when the first stars are now thought to have appeared, some 180 million years after the Big Bang. (Credit: N. R. Fuller/National Science Foundation) After the Big Bang and before the first stars ignited, the universe was a very dark and cold place. There were no galaxies, no supernovae, and no quasars. The universe primarily consisted of neutral hydrogen gas floating in an omnipresent sea of background radiation leftover from the Big Bang. Over time, gravity slowly shepherded the densest regions of hydrogen gas into compact clouds, which ultimately collapsed inward to form the first stars. When these primordial stars first began shining within the pitch-black void, they blasted the surrounding hydrogen gas with ultraviolet radiation. This excited the hydrogen atoms within the gas, causing them to absorb energy from the background radiation at one particular frequency — 1.4 gigahertz. Theoretically, astronomers knew that they should be able to detect the absorption or corresponding emission from this process, but until this study, they have been unable to do so. “The problem is, due to the expanding universe, this absorption would be observed at some [unknown] lower frequency,” said Peter Kurczynski, a program officer with the National Science Foundation who supported the study, in a video by NSF. “Finding that frequency, finding the absorption that comes when the first stars turn on, would be like listening to every station on your car stereo at once, and being able to tell that your favorite is missing.” To find this unknown signal, the team of researchers used an Earth-based instrument called a radio spectrometer, located at the Murchison Radio-astronomy Observatory (MRO) in Western Australia. As part of the Experiment to Detect the Global Epoch of reionization Signature (EDGES), the team measured the vast majority of the southern sky. After collecting the average radio spectrum for all astronomical signals, the team combed over the data searching for minute fluctuations in the signal’s power as a function of frequency.

The design for the radio spectrometer used in this study is relatively simple, working much like an FM radio receiver. It consists of two rectangular plates that function together as a radio antenna, and these plates are mounted on fiberglass legs sitting atop a metal mesh carpet. As radio waves enter the antenna, a sophisticated receiver amplifies them before a computer digitally records them. (Credit: CSIRO Australia)CSIRO Australia Initially, the team was searching for frequencies that corresponded to later points in cosmic time, but in 2015, they extended their search to lower frequencies, which would have come from even earlier. “As soon as we switched our system to this lower range, we started seeing things that we felt might be a real signature,” said Alan Rogers, a scientist at MIT’s Haystack Observatory and co-author of the study, in a press release. “We see this dip most strongly at about 78 megahertz, and that frequency corresponds to roughly 180 million years after the Big Bang. In terms of a direct detection of a signal from the hydrogen gas itself, this has got to be the earliest” Surprisingly, in addition to detecting the first sign of hydrogen gas being blasted by radiation from the first stars, the investigators may have also unexpectedly shed light on the true nature of dark matter. The results of the study revealed that the pre-star universe was likely a much colder place than previously thought. In fact, the researchers found that the hydrogen gas in the early universe was less than half the temperature they expected to find. This suggests one of two things: astronomers’ theories are missing something major about our universe, or the study has detected the first evidence of dark matter siphoning off energy from normal matter — a theory initially proposed by Renna Barkana of Tel Aviv University. “If Barkana’s idea is confirmed,” said Judd Bowman, an astronomer at Arizona State University and lead author of the study, in a press release, “then we’ve learned something new and fundamental about the mysterious dark matter that makes up 85 percent of the matter in the universe, providing the first glimpse of physics beyond the standard model.” However, Bowman is quick to note that the research is not yet conclusive. “We worked very hard over the last two years to validate the detection,” he said, “but having another group confirm it independently is a critical part of the scientific process.” In order to confirm the study’s findings, astronomers intend to bring new radio telescopes online, such as the Hydrogen Epoch of Reionization Array (HERA) and the Owens Valley Long Wavelength Array (OVRO-LWA). But for now, Bowman and his team have earned a moment to bask in the glory of their discovery. “There is a great technical challenge to making this detection, as sources of noise can be a thousand times brighter than the signal they are looking for. It‘s like being in the middle of a hurricane and trying to hear the flap of a hummingbird’s wing,” said Kurczynski. “These researchers with a small radio antenna in the desert have seen farther than the most powerful space telescopes, opening a new window on the early universe.” [This article first appeared on Astronomy.com]