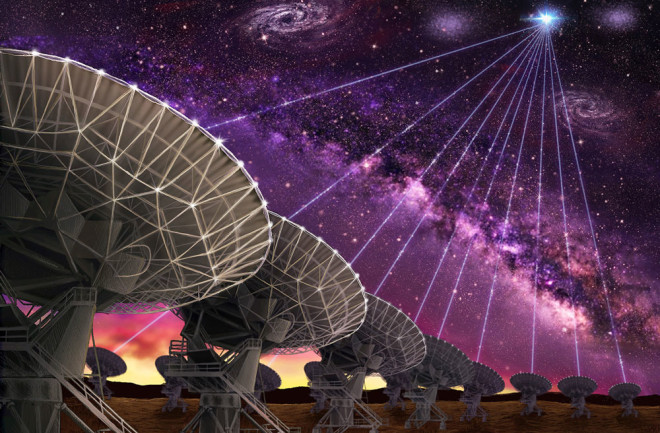 The dishes of the Karl G. Jansky Very Large Array depicted making the first-ever localization of a Fast Radio Burst. (Credit: Danielle Futselaar [www.artsource.nl])For as long as astronomers have known about Fast Radio Bursts (FRBs), they’ve been stumped. About a decade ago, researchers discovered in archived 2001 data an extremely fast — just a few milliseconds — burst of radio emissions. They’d never seen anything like it before, and didn’t know where it came from or what could cause it. Finally, we’re starting to get a few answers. Astronomers announced today at the 229^th meeting of the American Astronomical Society that, for the first time, they’d pinpointed the origins of one of these FRBs: a small dwarf galaxy about 2.5 billion light-years away. Today’s news, which is also detailed in articles in Nature and The Astrophysical Journal Letters, also found a new source of persistent, weaker radio emissions nearby; presumably the two are related but it’s not clear. It’s big step in the study of the cosmos, but we’ve still got a ways to go before we fully understand FRBs.

The first break came in 2012, when the Arecibo Observatory in Puerto Rico detected the first-ever repeating FRB, dubbed FRB 121102 (after the date of the first detection, Nov. 02, 2012). Before that, each one had been a single, one-off event. That alone was instructive: FRBs (or this one, at least) must not be the result of cataclysmic events, since something was still around to send the repeated signals. But even better, it meant other observatories could look in the same area to try to spot future repeat. It was “A good place to go fishing,” said lead author Shami Chatterjee of Cornell. Luckily, the universe obliged. “The FRB was extremely generous to us,” said Casey Law of UC Berkeley, one of the co-authors, because the Karl G. Jansky Very Large Array (VLA) observed a total of 9 bursts in its 83 hours of observing time in 2016. This narrowed down FRB 121102’s origins considerably, but still not enough. Subsequent observations from around the world, in radio and visual light spectra, found the source galaxy, in the direction of Auriga. Finally, we learned for sure FRBs (or, at least, this one) originated outside the galaxy, as had been suspected. These observations also revealed a steady source of radio emissions within 100 light-years of the FRB’s precise location. The two could be results of the same process, or be otherwise related, but the answers will have to wait until more observations come in.

Start of Something Big

So, mystery solved, right? Not quite. We still don’t know what actually causes FRBs, but at least now astronomers have some improved hypotheses. One option is a variety of exotic star, a highly magnetic kind of neutron star, which could cause just the right kind of emissions astronomers are seeing. Another possibility is a massive black hole within FRB 121102’s host galaxy, which could cause the radio signals. Still, the scientists cautioned, this is still just a single data source. It’s still the only known repeating FRB, after all; maybe there are multiple types of FRB, or this particular one is just an outlier. But that’s good news! “New mysteries in astronomy are somewhat rare,” Sarah Burke-Spolaor of the National Radio Astronomy Observatory, so FRBs are increasingly becoming the exciting new thing. There are more hypothesized models causing FRBs than actual detected bursts, said Chatterjee, “a great situation for us to be in.” With any luck, the next few years will answer more of these questions — and pose new ones.