Engineers have concluded Arecibo Observatory cannot be safely repaired after the failure of two cables. 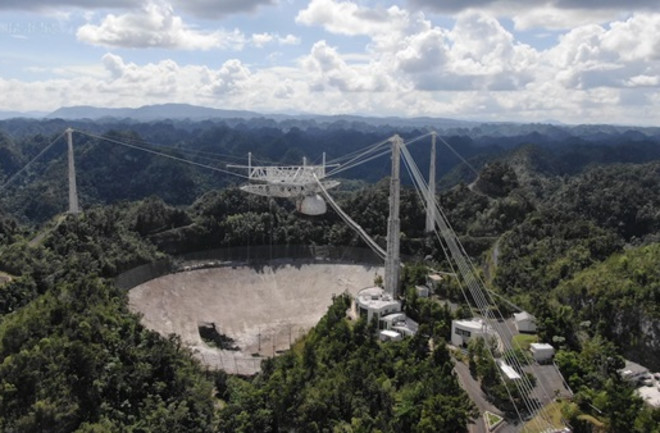 Both cables that have failed were anchored to the facility’s southeast observing tower (at left). This image, taken the day after the main cable break, shows additional damage to the reflector dish, enlarging the gash left by the previous auxiliary cable failure. (Credit: University of Central Florida/Arecibo Observatory)

After fifty-seven years of cutting-edge research, the iconic Arecibo radio telescope has reached the end of the road.

Due to two cable failures in the past three months, outside engineering firms have concluded the telescope cannot be repaired — at least, not without risking the total collapse of the 900-ton receiving platform onto the dish below, the lives of workers, and further damage to existing buildings onsite.

As a result, the U.S. National Science Foundation (NSF), which owns the facility, has decided to decommission Arecibo, the organization announced today.

Engineers are now “working against the clock” to develop a plan for a controlled decommissioning, said Ralph Gaume, the NSF’s astronomy division director, in a media briefing this morning. That could come in the form of a demolition using explosives, according to a report from one of the three engineering firms that have been working to try to save the facility after the failure of an auxiliary cable on August 6.

That cable slipped out of its socket at one of the three support towers that surround the observatory, tearing a 100-foot (35 meters) gash in the dish below. In the aftermath, engineering efforts focused on ensuring that the rest of the auxiliary cables did not suffer similar failures, as some had started to slip more than half an inch.

But then on August 10, one of the main cables attached to that same support tower snapped.

The main cable had seen some of its strands break, but engineers didn’t think a full failure was an immediate threat, as the remaining load was still within its design capacity. “I don’t think anyone understood that, clearly, the cable had deteriorated much below just those broken wires,” said Ashley Zauderer, NSF’s Arecibo program officer.

Engineers concluded that the main cable failure removed the safety margin necessary to conduct repairs and stabilization, which had been set to begin just days later. Another cable failure at the same support tower would push the cables beyond their design capacity, likely leading to a full collapse.

The only path forward would have been to demonstrate that the remaining cables could handle an increased load by testing them. But such tests would require placing workers at risk, as well as increase the chances of a total collapse, reported the engineering firm Thornton Tomasetti.

The loss of Arecibo is a major blow for the radio astronomy community and leaves a gaping hole in capabilities.

“I'm pretty crushed,” Scott Ransom, an astronomer at the National Radio Astronomy Observatory and member of the NANOGrav (North American Nanohertz Observatory for Gravitational Waves) project, tells Astronomy. NANOGrav uses Arecibo and the Green Bank Telescope in West Virginia to search for signs of gravitational waves by looking for telltale disruptions in the timing of pulsars.

“This is a huge blow to NANOGrav, as about one half of our gravitational wave sensitivity comes from Arecibo,” Ransom says. “And because it is so much more sensitive than GBT, it will be impossible to replicate the timing precision we get, even if we use a lot more time at GBT.”

Radio telescopes are already completely booked up, too, so it will be harder than ever for astronomers to get observing time, Yvette Cendes, a radio astronomer at the Harvard–Smithsonian Center for Astrophysics, tells Astronomy. The Very Large Array can do a lot of the same science as Arecibo, but Cendes says VLA gets twice as much time requested as it has available.

Plus, Arecibo had unique capabilities — even though the Five-hundred-meter Aperture Spherical Telescope in China has supplanted Arecibo as the largest radio telescope in the world, it doesn’t yet have the capability to transmit and act as a radar. “So you’re out of luck for radar mapping of planets and asteroids if that was your field,” says Cendes.

The loss of Arecibo is also “a huge blow to Puerto Rico,” says Ransom. It is a huge source of pride for the island. And the observatory has helped educate and inspire basically every kid on the island for many decades.”

NSF officials said that the decision to demolish the radio telescope was necessary to save the rest of the observatory’s infrastructure, including a lidar facility and the visitor and education center, which serves as a hub for outreach.

One of the three firms working on Arecibo believed that repairs would be possible if commenced immediately — and if the observatory was willing to risk a collapse. But that would endanger the visitor’s center and other buildings that sit below one of the support towers, said Gaume, leaving demolition as the only safe option.

Given that the struggle in recent years to secure funding for Arecibo, Cendes is not optimistic that the facility will be replaced anytime soon. “There’s probably something symbolic in the U.S.’s aging infrastructure for science in all this,” says Cendes.

For many astronomers around the world, the news is an emotional gut punch, as well. “I’m really sad,” said Ransom. “Feels like I'm losing a beloved friend.”