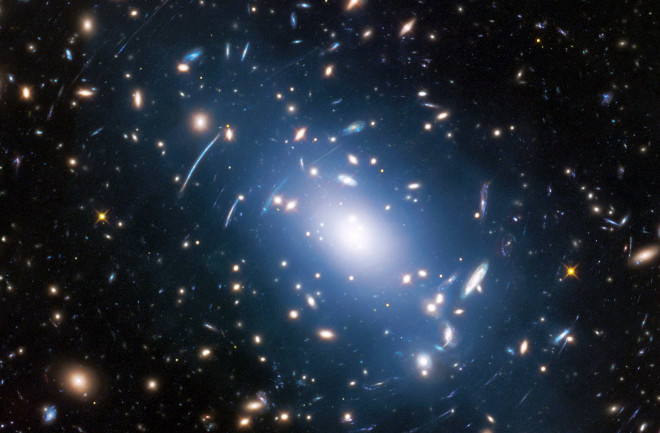 Two astronomers have devised a method that lets them “see” dark matter with the light from rogue stars. The pair has shown how images of faint starlight taken with the Hubble Space Telescope can be used to map dark matter’s distribution in galaxy clusters. The novel technique could ultimately help explore the nature of dark matter.

Dark matter remains one of the great mysteries of modern science. A theoretical form of matter, dark matter is thought to make up about 85 percent of all matter in the universe. Because dark matter doesn’t absorb, reflect or emit light, it is very hard to spot. In fact, it has never been directly observed and some even question whether or not it actually exists.

This new method, however, lets astronomers detect dark matter in galaxy clusters using what’s called intracluster light. Intracluster light is faint starlight that’s created by interactions between galaxies. When galaxies interact, their respective stars can be ripped apart from them, left to float freely throughout the galaxy cluster.

“These stars have an identical distribution to the dark matter, as far as our current technology allows us to study,” lead study author Mireia Montes of the University of New South Wales, said in a statement.

Because the intracluster light aligns with the dark matter in these clusters, it allows astronomers to see how the dark matter is distributed. In this study, the pair of astronomers used data from the Frontier Fields Hubble Space Telescope program. The research is published in Monthly Notices of the Royal Astronomical Society.

“We have found a way to ‘see’ dark matter. We have found that very faint light in galaxy clusters, the intracluster light, maps how dark matter is distributed,” Montes said about this new method.

Other efforts to map the distribution of dark matter use gravitational lensing — a technique that uses the light bent by matter in between a light source and the observer. But, while gravitational lensing requires accurate lensing and time-intensive spectroscopy, this new technique only requires deep-space imaging. Because of this, the astronomers who devised the new technique say it will be a more effective tool for mapping and studying galaxy clusters.

Aside from providing an effective method with which astronomers can map dark matter, this new research also offers opportunities to better explore the nature of dark matter itself. For example, dark matter appears to interact with regular matter only gravitationally. But, if researchers using this method find that dark matter actually distributes differently than the floating starlight, it could mean that dark matter is self-interacting. This would significantly change our current understanding of dark matter, what it might be, and how it behaves.