Extreme Radiation Could Strip Exoplanets of their Atmospheres 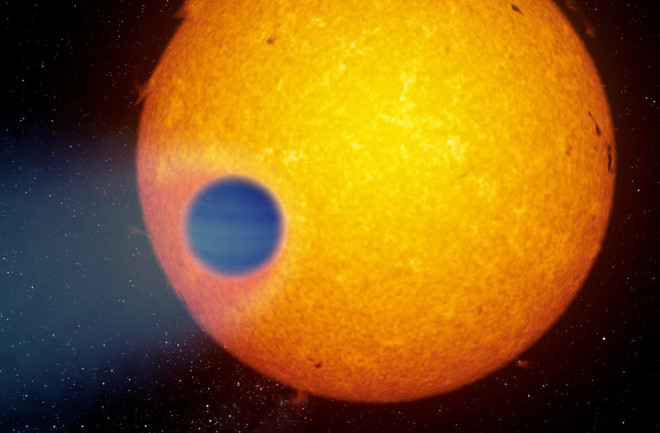 This artist illustration shows WASP-69b, which sits about 163 light years from Earth, orbiting its host star. (Credit: Gabriel Perez Diaz, SMM (IAC)) If orbiting just 4 million miles from your fiery host star wasn’t bad enough, things might have just gotten even worse. New research shows that stars emitting high levels of ultraviolet (UV) radiation could strip the atmospheres of their ultra-close exoplanets. While observing gas giants that orbit exceptionally close to their host stars, astronomers found that those bombarded with radiation were losing helium from their atmospheres. These results, which were published in multiple studies today in the journals Science and and Astronomy & Astrophysics, could help researchers understand the evolution of planetary atmospheres, and also determine if extreme radiation could be peeling gas giants' layers of clouds away to leave them as barren, rocky objects. Follow the Trail Astronomers from the Instituto de Astrofísica de Canarias (IAC) in the Canary Islands came across this strange phenomenon when they observed the exoplanet WASP-69b pass in front of its host star. During its transit, which takes just 3.9 days, the Jupiter-sized planet caused the star’s light to briefly dim, allowing researchers to home in on the orbiting object. They used the CARMENES instrument at Spain’s Calar Alto Observatory to break down the planet’s light into visible and near infrared wavelengths — revealing the chemical elements that make up its atmosphere. It was then that they noticed a strange, comet-like tail of particles escaping from the planet. "We observed a stronger and longer-lasting dimming of the starlight in a region of the spectrum where helium gas absorbs light," said the WASP-69b study’s lead author, Lisa Nortmann of the IAC, in a news release. "The longer duration of this absorption allows us to infer the presence of a tail." This loss of helium, the second-most abundant element in gas giants, wasn't an isolated incident, either. Using similar methods, the team studied four other planets that orbit extremely close to their host stars: gas giant KELT-9b, Neptune-sized GJ 436b, and hot Jupiter’s HD 189733b and HD 209458b. While helium wasn’t seen leaving the atmospheres of KELT-9b, GJ 436b or HD 209458b, the group did see a balloon of helium surrounding, and escaping from, HD 189733b. Wondering why these two planets were losing parts of their outer atmospheres, they turned to ESA’s Multi-Mirror X-Ray Mission (ESA XMM-Newton) for data about their host stars. The results showed that both HD 189733b and WASP-69b’s host stars were dangerously active — expelling much more UV radiation than the other host stars. And in yet another instance, astronomers from the University of Geneva detected a balloon of helium escaping the atmosphere of HAT-P-11b, whose nearby host star also emits high amounts of UV radiation. Their results were published today in the journal Science. Gas Giant Annihilation? These correlations lead researchers to believe that massive amounts of UV radiation are energizing helium particles, causing them to escape from the atmosphere and fly out into space. And once these gaseous envelopes have been completely stripped, all that’s left are the dense, rocky corpses of former gas giants. Follow-up studies will be needed to verify this theory, but thankfully, infrared spectrographs like CARMENES are making atmospheric observations a bit easier. "In the past, studies of atmospheric escape, like the one we have seen in WASP-69b, were based on space-borne observations of hydrogen in the far ultraviolet, a spectral region of very limited access and strongly affected by interstellar absorption," said University of Hamburg researcher Michael Salz, who authored the Astronomy & Astrophysics paper about HD 189733b. "Our results show that helium is a very promising new tracer to study atmospheric escape in exoplanets." And if this theory proves true, astronomers could use it to further compare the atmospheres of exoplanets, gain insight into their evolutions and shed light on the peculiar planets that sit a little too close to their host stars.