Exploring The Lost Moons Of Our Solar System

Turns out moons are gained and lost all the time in our solar system. 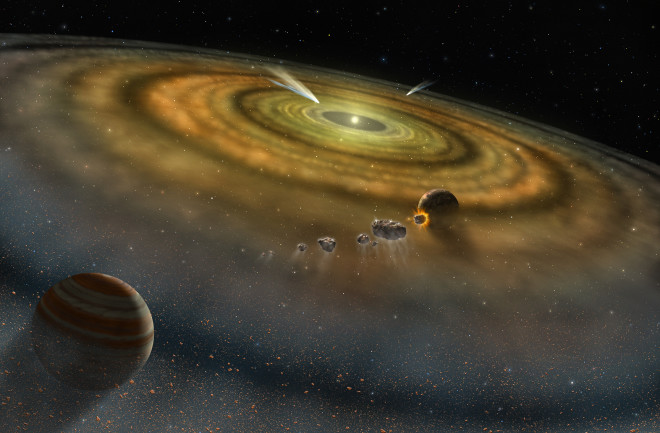 On Tuesday, Jupiter officially “gained” 10-12 moons. But that doesn’t make up for the dozens of moons the solar system has lost over time. Unlike the recent crop, the long lost moons were of pretty substantial size. This includes even a few now missing moons for Jupiter.

The king of our planets started out in a gas envelope, like the other planets. It’s system had quite a bit of heft, but the slow drag of this cloud may have pulled in moons as large as Mercury into the inner hell of the planet below.

“Some people say that if a huge disk of gas were around Jupiter for too long, moons would begin to fall in,” says Matija Cuk, a research scientist at the SETI Institute.

The idea that Jupiter lost some of its early satellites was outlined in a 2009 article published in the book Europa. In this scenario, there weren’t four Galilean-mass satellites like Io, Europa, Ganymede, and Callisto, but many. Some were too close to Jupiter, with the primordial gas around it slowing their orbits until they fell into the planet and were destroyed in its depths.

In recent years, Cuk says astronomers have realized that the early solar system was even more chaotic than originally thought. And it may have been chaotic up to the time of the dinosaurs in some cases. And it’s not just Jupiter.

In Roman mythology, Saturn was known for eating its young — a job that’s been taken up by Jupiter in our solar system, seemingly. But there’s something really weird going on at the ringed planet.

If you follow astronomy news, you may have heard of Enceladus, a tiny moon or Saturn with a big ocean underneath. But while our solar system is 4.5 billion years old, Enceladus may be much, much younger.

“It’s not mainstream yet, but it’s gaining credibility that both the rings and the moons (of Saturn) are the results of collisions a few hundred million years ago,” Cuk says. In 2016, he authored an Astrophysical Journal study suggesting that Saturn’s inner moons are quite young. Meanwhile, farther out moons like Titan, a world bigger than Mercury with a gaseous atmosphere, could be as old as the solar system.

Here’s how the theory goes: at least two large moons of Saturn collided. Some of the debris fell onto the gaseous planet, but much of it fell toward the rings. Roughly two planets worth of ice and rock ended up circling Saturn. And some of it crossed the Roche limit — the area around a planet where a body can no longer hold its shape and is crushed into billions of pieces, forming rings.

But Saturn also has five moons in closely clustered orbits within the debris zone but outside the Roche limit — Enceladus, Mimas, Tethys, Rhea, and Dione. Each are a few hundred miles in diameter. Some have a substantial portion of rock, others seem to be entirely ice balls. But that rock and ice may have formed similarly sized worlds that were destroyed and then recreated in new configurations.

In other words, the satellites we see today may contain pieces of that earlier generation of lost moons. And the current moons have strange orbital inclinations suggesting that they may be still settling in. Saturn’s rings are estimated to be, at most, 200 million years old — if the five small moons have similar lifespans, they may be some of the youngest members of our solar system family.

Then there’s poor Neptune. Today, Neptune serves as the shepherd of the Kuiper Belt, the icy region of the solar system where Pluto resides. Kuiper Belt objects orbit in what astronomers call a 2:3 resonance with Neptune, completing three orbits every time Neptune makes two. This keeps the orbits fairly tidy, and prevents collisions with Neptune.

But long ago, the belt had a lot more objects, and they crossed into the Neptune system a lot. The Kuiper Belt of today has only a small fraction of its original mass today. While the planets were still settling into their orbit, Neptune pulled and flung around a lot of the Kuiper Belt matter, including wholesale flinging worlds out of the solar system. But in the process, Neptune gained a giant moon — while losing a series of smaller ones.

Some theories suggest that two particular objects came through Neptune, probably a pair roughly equivalent in size — as if they were each other’s moons. This double dwarf planet got separated by Neptune — the object that stayed behind orbiting Neptune backward. We know it today as Triton.

“Encounters with Neptune are frequent, and Triton just happened to come in slow enough,” Cuk says. “Leading theories are that Triton was a binary, and one half escaped.”

One of those moons made its way through a region where Neptune’s original moons resided. Because it was orbiting backwards, these small moons may have hit their intruder head on. Triton may be made from as much as 10 percent made of Neptune’s original inner moons.

There are, of course, a few other lost moon theories floating out there—that when a protoplanet called Theia smashed into Earth to form the moon, it may have created several moons. And, until we can study the outer solar system moons in depth, we may not fully understand if any of these hypotheses hold water.

Cuk says any planets that escape the grasp of a giant planet don’t last long. A few lucky ones might, under the right conditions, get ejected out, but most will take up an orbit right outside their original planet — and eventually collide with it. Other moons may have destabilized enough to eventually fall into the Sun.

But whatever the ultimate answer, our solar system may have been a lot more full of moons than we’ve ever thought — and their ghostly trail is just waiting for us to discover it.