Exploring Glaciers on Mercury, A Planet Where Temps Can Soar Over 800 Degrees Fahrenheit 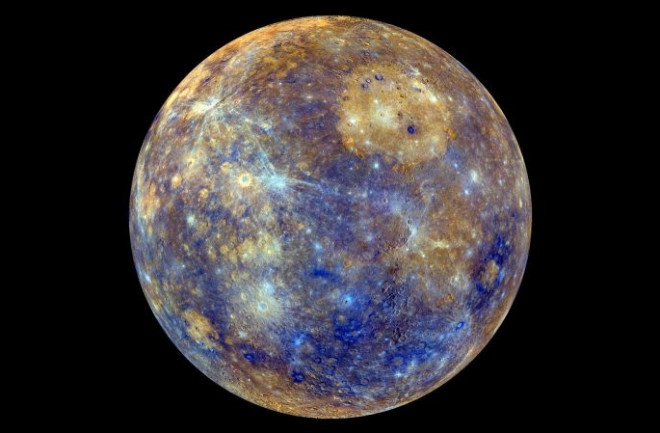 Mercury as depicted in fake colors that show the differences in composition on the surface. (Credit: NASA/JHU-APL/Carnegie Institution of Washington)

The Ice of Mercury

Mercury, the closest planet to our sun and the second hottest, also has glaciers. That may come as a surprise, but it’s due to the fact that the planet has no tilt, and so the bottom of some deep craters near the poles are left permanently shadowed. With no atmosphere, the planet’s night side quickly loses heat and dips far below freezing, allowing ice to form and accumulate in regions that never see the sun.

Study leader James Fastook and his team used the University of Maine Ice Sheet Model (UMISM) to model Mercury’s ice and explore ice activity on the planet. It’s a model previously used to study ice sheets on Earth and Mars, but the team found that it also worked well in the unusual environment of Mercury.

It’s estimated that Mercury has been accumulating ice for approximately 50 million years. This ice is up to 164 feet (50 meters) thick in some areas.

The water from these objects essentially “bounces” around the planet until some of it lands in a cold location and gets stuck, Fastook says. Around 15 percent of the water that hits Mercury likely ends up staying there.

With the UMISM, Fastook and the rest of the team found that since ice first accumulated on the planet it has remained relatively stable. In fact, the team found that the ice on Mercury barely flows or moves at all. The team also used the model to further explore how the planet’s hot surface interacts with these cool, icy areas.

They found that “heat flowing through the ground from the surrounding hot terrain was an important component of the dynamics since it did lead to some potentially significant movement (without it the ice was basically stationary),” according to Fastook.

While scientists have known about glaciation on Mercury since the 1990s, this work has greatly expanded the understanding of exactly how that ice has come to be and how it moves and changes.

This work is published in the journal Icarus.