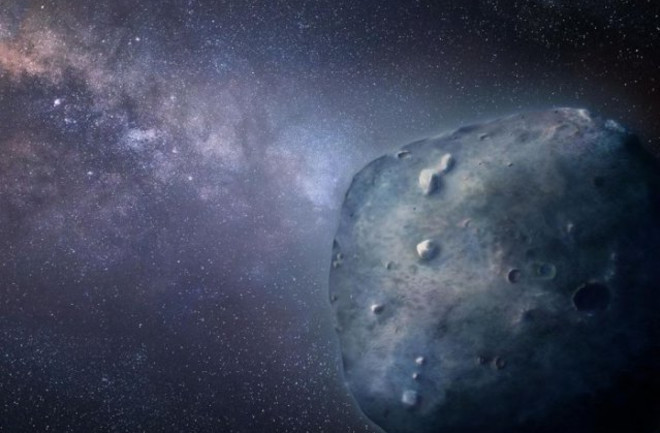 A weird, blue rock known as 3200 Phaethon, or more commonly Phaethon, got pretty close to Earth last year. That gave scientists a unique opportunity to study it up close — and they found that this blue asteroid (that acts like a comet) is even stranger than they expected. “It’s a weird blue asteroid that created the Geminids and gets so hot that metals on the surface turn to goo,” Theodore Kareta, a graduate researcher at the University of Arizona, said about Phaethon at a press conference Oct. 23 at the Division for Planetary Sciences of the American Astronomical Society 50th annual meeting.

Before this flyby, scientists knew that Phaethon was blue and had a strange orbit that brings the asteroid close to the sun and then flings it out past Mars. It’s a “very eccentric, inclined orbit,” Kareta said. Scientists have also suspected for some time that the object might be the “parent” of the Geminids meteor shower. But this recent close encounter showed that Phaethon is actually much darker than we’d previously thought — only a little brighter than charcoal — and its surface is homogeneous and uniformly “scorched” by the sun. There are a number of mysterious that still remain about this strange asteroid. While the object’s blue color is a sign that it has traveled close to the sun (which is clearly true, given its strange orbit), scientists are still working to fully explain its blue hue. The verdict is also out on whether the strangely-colored object is even an asteroid.

The surface of the object, while it appears blue, is also extremely hot. “(Phaethon) can reach 1,500 degrees Fahrenheit,” Kareta said.

But, while this flyby provided scientists with amazing new data, they are still working to figure out Phaethon’s true nature. “Is it a dormant comet? Is it an object that made the Geminid shower in a normal way? Or is it something different?” Kareta said.

Scientists will be able to answer many questions about the object when the Japanese space agency, JAXA, completes a high-speed flyby of the object in 2025 as part of the Destiny+ mission. The spacecraft will also study smaller objects coming from Phaethon.

By studying and better understanding Phaethon, it can give scientists a better picture of how similar objects formed and may have looked and behaved in the past.