Expelled and MySpace: confluence of teh stoopid

I'm not a huge fan of MySpace; the layout is awful, the interface nonsensical, the actual social networking capabilities limited^*. Now imagine taking the epic dumbosity that is Expelled, and putting it on MySpace. You might expect a black hole of stoopid would form from the incredible density of nonsense in one place. You'd be right. The caretakers of the Expelled MySpace page did something so mind-bogglingly silly that you'd think it had to be a joke; they put up a poll (scroll down a bit), asking the question, "Do you think the theory of Intelligent Design should be taught in our education system?" Evidently, a little while after the poll went up, unsurprisingly, it was heavily leaning toward "yes". But then PZ noticed, as did many others. You can guess how things went after that: 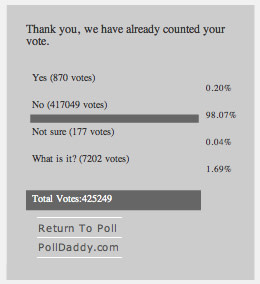 Heh. Don't let me stop anyone from piling on, by the way. I suspect eventually the poll will be pulled, once the caretakers of the page figure out which one is the hole in the ground.

^* That hasn't stopped me from using it, of course, but that's mostly due to legacy. It was one of the first socnets, but that doesn't stop it from being an interface nightmare.