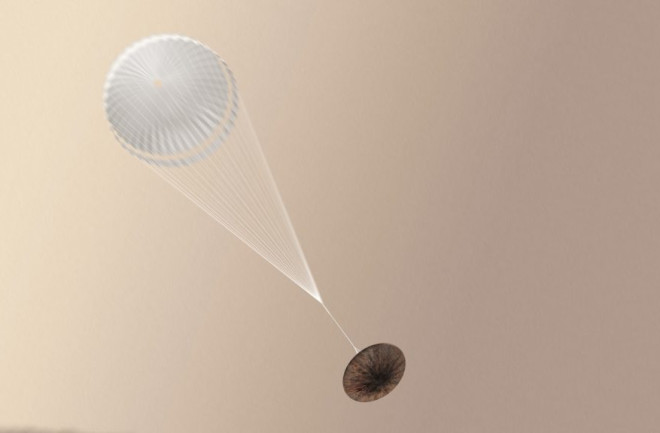 Most Mars landers or rovers use parachutes as part of their landing procedure, but Mars’ thin atmosphere makes even this low-tech approach a perilous one. (Credit: ESA/ATG medialab)

ExoMars is a planned mission to Mars set to launch in the summer of 2020. But a recent series of parachute test failures may threaten that launch date.

ExoMars is being built by a joint operation between the European and Russian space agencies (ESA and Roscosmos). It was designed as a two-part mission, the first half of which launched in 2016. That mission was meant to put a craft called the Trace Gas Orbiter into Martian orbit and deliver the Schiaparelli lander to the ground. And while TGO successfully went into orbit and is still collecting data, Schiaparelli crashed into Mars, ending the lander portion of the mission before it could begin.

The mission’s second half is set to launch next year. And an initial low-altitude test of the main parachute was successful in 2018. But this year, two high-altitude tests failed.

Landing on Mars is notoriously difficult, with its relatively high gravity and thin atmosphere that makes any kind of braking difficult. NASA is still the only agency to successfully land multiple times on the surface, but ESA and Roscosmos hope that doesn’t remain the case.

Most Mars missions use parachutes at some point in their landing procedure, even if they also deploy braking thrusters or even a sky crane maneuver. But despite multiple successful landings in space history, that doesn’t make this a solved problem. Each lander has a different size, shape, or landing procedure that changes the demands on the parachute, so they can’t just copy from past working designs – though NASA’s Mars 2020 rover is built from spare Curiosity parts and will in fact be a more or less duplicate mission in terms of its landing procedures.

This second stage of ExoMars, completing the first half begun in 2016, is composed of a European-built rover called Rosalind Franklin and a Russian-built lander named Kazachock that will descend as one craft, weighing a combined 4,000 pounds. Its parachute is the largest flown on any Mars mission, at 115 feet across. That parachute successfully passed a low-altitude test back in March 2018, after being dropped from a height of just three-quarters of a mile (about 4,000 feet).

But the final configuration calls for two main parachutes, each with a smaller pilot chute to help the main one inflate (this is a common accessory for any large parachute system). And when that system was tested in May 2019, dropping from a height of 95,000 feet (18 miles), both of the main chutes developed tears during inflation.

Engineers adapted their design, and tried again on August 5, testing just the largest chute at high altitude again. But despite the changes, it also developed tears.

“It is disappointing that the precautionary design adaptations introduced following the anomalies of the last test have not helped us to pass the second test successfully, but as always we remain focused and are working to understand and correct the flaw in order to launch next year,” said Francois Spoto, ESA’s ExoMars team leader, in an ESA statement.

Scientists are planning a workshop for September to continue brainstorming improvements to the parachute system, including engineers from NASA who have worked on previous Mars parachute systems.

There’s another high-altitude test for the main chute planned for later in 2019, and engineers hope to certify the full system in early 2020. The Kazachok lander is completed, while the Rosalind Franklin rover is still under construction. The mission is set to launch between July 25 and August 13 of 2020, giving engineers just under a year to fix their parachutes and finish all testing between now and then.