Everything Worth Knowing About ... Auroras

Colorful shape-shifters of the heavens. 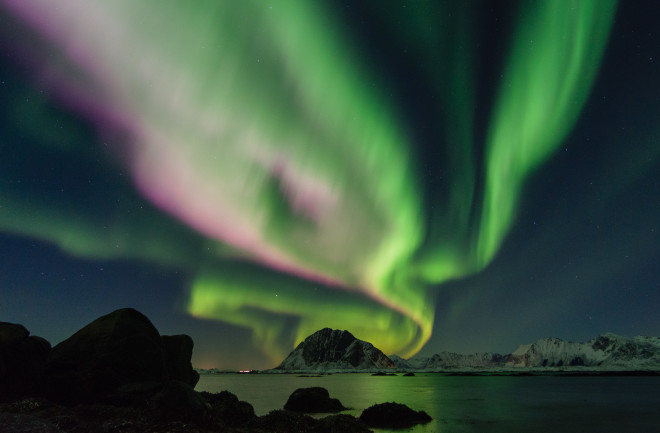 When the space weather is just right, one of nature’s grandest spectacles unfolds over Earth’s poles. Visible on clear nights, clouds of glowing green slowly morph into gyrating arcs that cover the sky — then vanish. And repeat. At times the lights appear straight overhead, falling as cosmic rain in shades of green, red and blue. It’s a phenomenon humanity has marveled at for millennia. Yet scientists are still unraveling its mystery.

Our modern understanding begins on Sept. 1, 1859. British astronomer Richard Carrington was tracking sunspots when a group unlike any other he’d seen appeared. It sent out two intense flashes of white light and vanished minutes later. Those bright flashes signaled that an enormous eruption — the largest geomagnetic storm in history — was heading for Earth.

When it hit, the storm was so intense that sparks shocked telegraph operators through their machines and set their paper on fire. Rare red auroras appeared as far south as Hawaii and El Salvador. Called the Carrington Event, the incident showed auroras were caused by solar activity — but half a century passed before science could explain how.

Forecasters still struggle to predict this space weather, and scientists have yet to understand its subtleties. That ongoing effort is vital to protecting power grids and satellites, which are sensitive to the same power surges that have inspired awe for thousands of years.

How to Get That Glow

Earth is a giant magnet with two poles. The magnetism of the sun is a little more complicated. Our star has north and south, plus a patchwork of polarities that rip holes and cause eruptions from its atmosphere. “You get a fire hose of particles coming off the sun,” says Tom Berger, director of the federal Space Weather Prediction Center in Colorado. These ejections fuel the solar wind, which races toward Earth at hundreds of miles per second.

As these wind-borne particles — mostly electrons and protons — breach Earth’s atmosphere, they work just like Vegas-style neon lights. Solar particles (the electric current) stream down Earth’s magnetic field lines (the tube) and collide with molecules of nitrogen and oxygen (the gas), exciting them until they glow in various colors.

Geomagnetic storm magnitude is measured using the Planetary K-index, after Kennziffer, a German word for “indicator.” If the index rises to 4 (on a 1-9 scale), auroras are likely and an alert is issued, a handy heads-up for power grid and satellite operators, as well as aurora chasers.

Paint With All the Colors of the (Solar) Wind

Earth’s atmosphere is mostly nitrogen and oxygen, but the exact concentration varies with altitude. Aurora colors do, too. Auroras happen when charged particles smash into atmospheric gases and energize them. And each gas emits a particular color as a result: Oxygen makes green light at common aurora altitudes, so that’s what we see most often.

Aurora watchers have long reported hearing strange claps and crackles during intense displays, but it wasn’t until 2016 that scientists found a possible explanation: an atmospheric phenomenon called an inversion. A pocket of warm air, accumulating negatively charged particles, forms between layers of cold air full of positively charged particles without mixing. Geomagnetic disturbances force the accumulated charges to discharge, creating sparks and sounds.

NASA’s sun-tracking spacecraft uses sound waves — similar to a medical ultrasound — to track action on the back side of the sun. Seeing what could soon face Earth lets companies prep for geomagnetic storms.

In 2015, NASA launched the Magnetospheric Multiscale spacecraft to study the mysterious interactions between Earth and the solar wind when our planet’s magnetic field lines occasionally break and reconnect, which also affects auroral activity.

Earth’s not alone in its regular light shows. In late December 2014, NASA’s MAVEN spacecraft watched auroras in Mars’ atmosphere. And Hubble caught auroras on Jupiter, too, seen in ultraviolet light.

30,000 B.C. Early Europeans may have carved images of auroras into rock art panels.

~A.D. 1000 The Sami, nomadic Scandinavian reindeer herders who live north of the Arctic Circle, believe auroras were spirits of the dead. The lights are still celebrated in a type of singing called the yoik.

1619 Galileo coins the term aurora borealis after the Roman goddess of dawn, Aurora, and the Greek “northern winds.”

1882-83 Danish astrophysicist Sophus Tromholt helps establish a northern lights observatory in Norway to determine aurora altitudes and shows that auroras are more likely to happen at the peak of the sun’s 11-year cycle of solar activity.

1909 Kristian Birkeland, a Norwegian physicist, proves that the sun’s charged particles create auroras when they hit our magnetic field. He put a magnetized sphere — a lab “Earth” — in a box and pummeled it with electrons. The sphere glowed near its poles.

1910 Another Norwegian physicist, Carl Størmer, begins photographing auroras, often simultaneously imaging the same formations from different directions. Over the next four decades he’ll take 100,000 shots, mapping the shape of auroras and determining a typical altitude of 50 to 100 miles.

2012 A coronal mass ejection on par with the Carrington Event blasts off the sun and narrowly misses Earth.