Everything in the Universe Is Made of Math – Including You

In this excerpt from his new book, Max Tegmark proposes that our reality isn't just described by mathematics, it is mathematics. 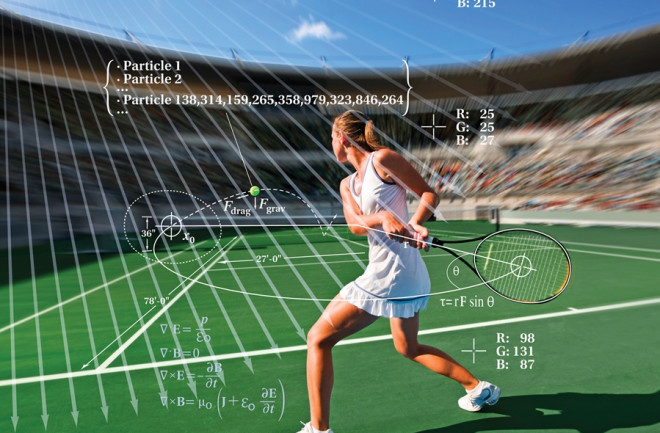 It’s a Friday morning in Princeton when I find this gem in my inbox from a senior professor I know:

Subject: Not an easy e-mail to write ... Dear Max,

Your crackpot papers are not helping you. First, by submitting them to good journals and being unlucky so that they get published, you remove the "funny" side of them. ... I am the Editor of the leading journal...and your paper would have never passed.

This might not be that important except that colleagues perceive this side of your personality as a bad omen on future development. ... You must realize that, if you do not fully separate these activities from your serious research, perhaps eliminating them altogether, and relegate them to the pub or similar places you may find your future in jeopardy.

I’ve had cold water poured on me before, but this was one of those great moments when I realized I’d set a new personal record, the new high score to try to top. When I forwarded this email to my dad, who’s greatly inspired my scientific pursuits, he referenced Dante: Segui il tuo corso et lascia dir le genti! “Follow your own path, and let people talk!”

I’d fallen in love with physics precisely because I was fascinated with the biggest questions, yet it seemed clear that if I just followed my heart, then my next job would be at McDonald’s. I developed a secret strategy that I called my Dr. Jekyll/Mr. Hyde Strategy, and it exploited a sociological loophole: What you do after work is your own business and won’t be held against you as long as it doesn’t distract from your day job.

So whenever authority figures asked what I worked on, I transformed into the respectable Dr. Jekyll and told them I worked on mainstream topics in cosmology. But secretly, when nobody was watching, I’d transform into the evil Mr. Hyde and do what I really wanted to do.

This devious strategy worked beyond my wildest expectations, and I’m extremely grateful that I get to work without having to stop thinking about my greatest interests. But now, as a physics professor at MIT, I feel that I have a debt to pay to the science community. I have a moral obligation to more junior scientists to bring Mr. Hyde out of the academic closet and do my part to push the boundary a little.

So what paper of mine triggered that “stop or you’ll ruin your career” email above? It was about the core idea that I’m about to discuss: that our physical world is a giant mathematical object.

What’s the answer to the ultimate question of life, the universe and everything? In Douglas Adams’ science fiction spoof The Hitchhiker’s Guide to the Galaxy, the answer was 42; the hardest part turned out to be finding the real question. I find it very appropriate that Adams joked about 42 because mathematics has played a striking role in our growing understanding of the universe.

The idea that everything is, in some sense, mathematical goes back at least to the Pythagoreans of ancient Greece and has spawned centuries of discussion among physicists and philosophers. In the 17th century, Galileo famously stated that our universe is a “grand book” written in the language of mathematics. More recently, the Nobel laureate Eugene Wigner argued in the 1960s that “the unreasonable effectiveness of mathematics in the natural sciences” demanded an explanation.

Soon, we’ll explore a really extreme explanation. However, first we need to clear up exactly what we’re trying to explain. Please stop reading for a few moments and look around you. Where’s all this math that we’re going on about? Isn’t math all about numbers? You can probably spot a few numbers here and there — for example the page numbers of this magazine — but these are just symbols invented and printed by people, so they can hardly be said to reflect our universe being mathematical in any deep way.

When you look around you, do you see any geometric patterns or shapes? Here again, human-made designs like the rectangular shape of this magazine don’t count. But try throwing a pebble, and watch the beautiful shape that nature makes for its trajectory!

The trajectories of anything you throw have the same shape, called an upside-down parabola. When we observe how things move around in orbits in space, we discover another recurring shape: the ellipse. Moreover, these two shapes are related: The tip of a very elongated ellipse is shaped almost exactly like a parabola. So, in fact, all of these trajectories are simply parts of ellipses.

We humans have gradually discovered many additional recurring shapes and patterns in nature, involving not only motion and gravity, but also electricity, magnetism, light, heat, chemistry, radioactivity and subatomic particles. These patterns are summarized by what we call our laws of physics. Just like the shape of an ellipse, all these laws can be described using mathematical equations.

Equations aren’t the only hints of mathematics that are built into nature: There are also numbers. As opposed to human creations like the page numbers in this magazine, I’m now talking about numbers that are basic properties of our physical reality.

For example, how many pencils can you arrange so that they’re all perpendicular (at 90 degrees) to each other? The answer is 3, by placing them along the three edges emanating from a corner of your room. Where did that number 3 come sailing in from? We call this number the dimensionality of our space, but why are there three dimensions rather than four or two or 42?

There’s something very mathematical about our universe, and the more carefully we look, the more math we seem to find. So what do we make of all these hints of mathematics in our physical world? Most of my physics colleagues take it to mean that nature is for some reason described by mathematics, at least approximately, and leave it at that. But I’m convinced that there’s more to it, and let’s see if it makes more sense to you than to that professor who said it would ruin my career.