Even in Space, Microbes Continue to Evolve 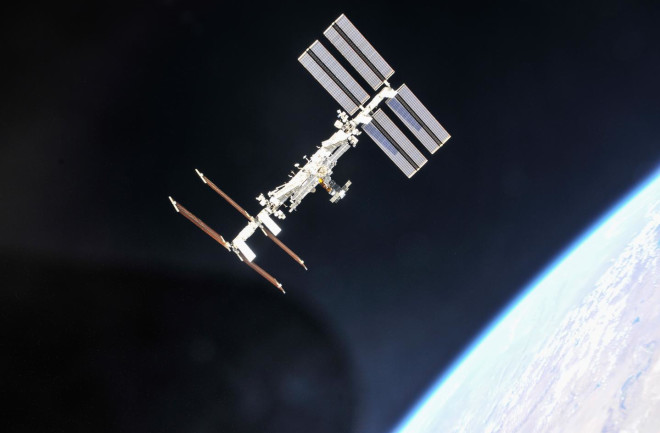 The International Space Station, as photographed by Expedition 56 crew members from a Soyuz spacecraft. Researchers have found that bacteria work hard to survive the harsh conditions aboard the space station. (Credit: NASA/Roscosmos)

Genetic mutations are life's ace in the hole. When confronted with challenging environments, species will adapt over time, incorporating beneficial genetic alterations into their DNA to grow new and useful traits. It's no different in space. A new study from Northwestern researchers finds that microbes aboard the International Space Station are changing genetically in response to the conditions there. It's no danger to the astronauts there, it's just a reminder that evolution continues even away from Earth. The team found that the genetic changes found in these microbes are simply caused by them working hard to survive and respond to the harsh conditions in space. In fact, the team has suggested that these organisms could even be evolving on the space station.

These researchers studied two species: Staphylococcus aureus and Bacillus cereus. S.aureus, also known as Staph, is a well-known human pathogen that contains the potentially-deadly MRSA strain. B.cereus is a species of bacteria that lives in soil and has fewer implications for human health. Aboard the space station, these species are found on a variety of surfaces — including, recently, antibiotic-resistant strains on the space station toilet. “Just like on Earth, there are microbes everywhere on the ISS!” Northwestern's Erica Hartmann, who led the study, said in an email. “For these species, we found that lifestyle functions (e.g., the ability to make things, respond to stress, or eat/breathe), not antibiotic resistance and virulence, appear to play a role in bacterial survival in buildings,” Hartmann said. Bacteria typically thrive in warm environments, part of the reason they like our own bodies so much. But on the cold surface of a building or, in this instance, a space station, the organisms have to work a little harder to survive. To do this, the team found that these species adapted with genes that make it possible for the organisms to eat, grow and live in the unusual space station environment. Hartmann noted that these results are just for these two species, and might not hold true for others. The team will continue to study organisms aboard the space station and also dive deeper into the variables on the space station that are pushing these organisms to change. The study of microbes in a space station environment could one day support the survival of humans on deep-space missions and on the surface of Mars. Understanding how microbes react to a space environment will be important to prevent bacterial infections. “We do not live in a sterile environment. In space, bacteria will continue to be found wherever we go, really wherever we take them, including to Mars. As we plan to send more people to space, we need to understand the health implications of taking our microbes with us,” Hartmann said. This work was published today (Jan. 8) in the journal mSystems.