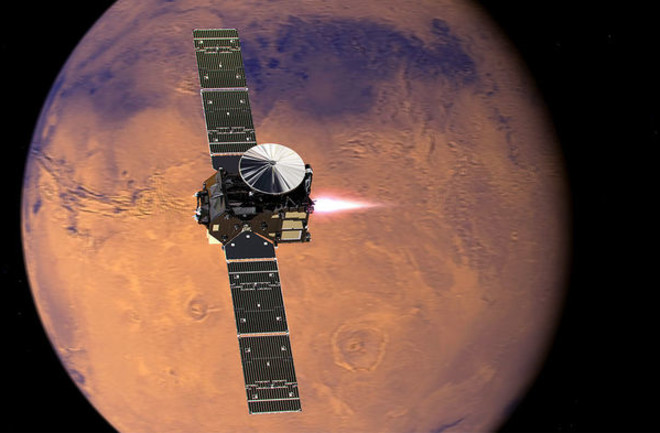 The Trace Gas Orbiter has been hunting for methane in Mars' atmosphere since 2016. (Credit: TG Medialab/ESA)

Scientists first detected traces of methane gas on Mars years ago, and it was exciting because the compound is a sign of life here on Earth. But a European orbiter has yet to find any evidence of methane in the planet’s atmosphere, despite being expressly made for the purpose. It’s complicating scientists’ search for life on the Red Planet.

Traces of methane were first detected in Mars’ atmosphere by the European Space Agency’s (ESA) Mars Express orbiter in 2004. But, while some reveled in the discovery, other researchers believed the instrument wasn’t sensitive enough to create reliable results because it could only measure methane at a level of 10 parts per billion (ppb).

Ten years later, NASA’s Curiosity rover detected methane again in the planet’s Gale Crater. This past summer, Curiosity made another major methane discovery when it found that the Red Planet has a seasonal methane cycle.

But the ESA’s Trace Gas Orbiter (TGO), which arrived at the planet in 2016, has found absolutely no methane in Mars’ atmosphere. The orbiter is using two spectrometers, both specially designed to detect methane in extremely low concentrations. At a semiannual meeting of the American Geophysical Union, the TGO team said that these instruments are working perfectly well. The TGO team looked for concentrations of methane as low as 50 parts per trillion and extended their observations almost all the way to the planet’s surface. Still, no methane has been detected.

The data collected by TGO’s spectrometers has some noise that the team must clean up, Ann Carine Vandaele, the principal investigator for TGO’s NOMAD spectrometer, said at the meeting, as reported by Science. “But we already know we can’t see any methane,” she added.

The Curiosity team has suggested that Mars’ methane likely comes from geological sources below the planet’s surface, though they couldn’t rule out organic sources, either. So, while TGO’s results are puzzling, they do help narrow down the search a bit by suggesting that there’s likely no methane coming from above the surface. Sources beneath the surface are still a viable reality, though.

However, these findings do rule out a previous suggestion that massive amounts of carbon from solar system dust enters Mars’ atmosphere every year and is turned into methane by solar radiation,

TGO’s findings might seem like a major flop in the search for life on Mars. But, as Sushin Atreya, a member of the Curiosity science team, explained to Science, it is possible that there could be methane beneath the planet’s surface that is not detected in the atmosphere. In fact, Atreya said that there could be thousands of methane sources, like the spot in Gale Crater where Curiosity measured a methane spike, and atmospheric signals could still be absent.

“I actually did the calculation. It’s going to average out to be a very, very low value, nondetectable,” he said.