Hot on the heels of Mercury changing its name back from Canada, I find out that Europe has signed an agreement to send a probe to the little planet. 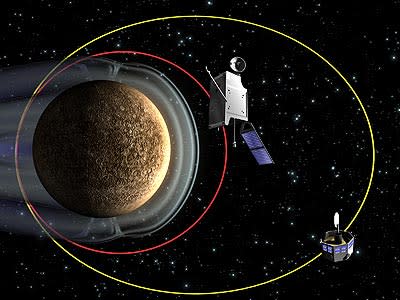 Called BepiColombo, it's a pretty ambitious mission. It will launch in 2013 and arrive at Mercury 6 years later, using a combination of -- get this -- planetary slingshots, chemical rockets, and an ion engine. Cool. There are two orbiters in this mission. One, the Mercury Planetary Orbiter, will do the usual incredible imaging of the planet, including using wavelengths of light that allow a mineralogical study, and the other is the Mercury Magnetospheric Orbiter which will investigate Mercury's magnetic field. The European Space Agency will build the imager, and Japan will handle the manetospheric observer. You probably won't hear too much about this mission for a while since it won't even launch for several years, but when the time comes, it will probably improve our understanding of Mercury quite a bit, even over what MESSENGER will tell us. That's always a good thing.