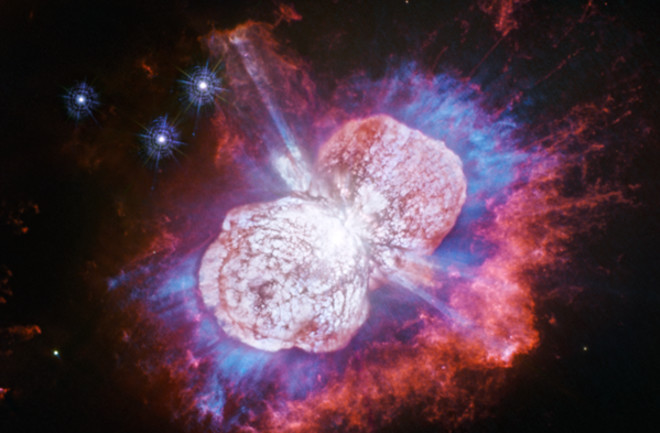 As though in preparation for summer festivities, the Hubble Space Telescope captured this cosmic fireworks show from Eta Carinae. The double star system, glowing in red, white, and blue, has exploded several times. The most recent explosion was nearly 200 years ago, in 1838, when an event called the Great Eruption set this fireworks show off.

Hubble has been photographing Eta Carinae for 25 years, but this is the highest resolution photo it has taken of the system yet. The new photo was taken in ultraviolet light using Hubble’s Wide Field Camera 3, revealing magnesium gas (blue) amidst glowing nitrogen (red). Astronomers expected to see magnesium among the outer filaments of red nitrogen. But they instead also found it, surprisingly, filling the space between the expanding “bubbles” of dust and gas from the stars and the outlying nitrogen.

The pair is about 7,500 light-years from Earth. Once an important star to navigators, Eta Carinae is no longer visible to the naked eye on Earth. There is still a lot that’s unknown about Eta Carinae, including how large the star system was before the Great Eruption. This new Hubble photo may even help scientists figure out how the Great Eruption began.

Regardless of what set them off, the fireworks are set to end when Eta Carinae’s larger star explodes as a supernova. This event could have even happened already, but due to the distance, it would take almost 8,000 years for the light to reach Earth.