Eruptions at Pavlof and Veniaminof in Alaska Continue 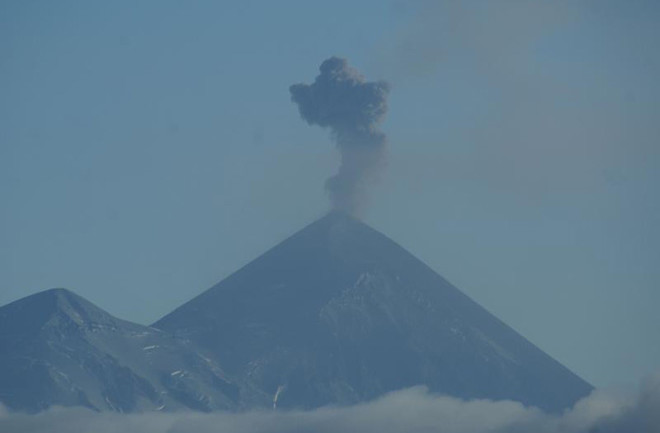 A small ash plume at Pavlof in Alaska seen on June 10, 2013. Continued small ash plumes like this accompany the current lava flow/dome activity on the volcano. Image: Paul Logan / AVO-USGS I was out of town for much of last week in Orange, CA for the Council on Undergraduate Research Business Meeting, so it has been a bit since my last update. I'll try and catch us up here on some of the ongoing eruptions in Alaska. The eruption inside the caldera at Veniaminof continues onward, at least according to the seismic information. Tremor continues to be recorded on the operating seismic stationsThe information statement that the Alaska Volcano Observatory released about a week ago says that this eruption has been dominated by a lava flow that had stretched about a half a kilometer from the intracaldera cone. However, very little ash has been produced by the eruption -- only rarely spotted from the webcam in Perryville and no explosions have been recorded either on the seismometers or via infrasound. Unfortunately, monitoring of the eruption has been limited because of cloudy weather at Veniaminof and the fact that only 2 of the 7 seismic stations near the volcano are operating normally. UPDATE: Culture Volcan has some nice webcam captures showing some visible incandescence at coming from Veniaminof, although it appears to be well south of the active cone -- could be part of the lava flow? Meanwhile, at Pavlof, effusion of a small lava dome or flow seems to be continuing as well. Like at Veniaminof, satellite monitoring has been able to detect a thermal anomaly at the active vent on Pavlof even if no visual observations can be made. Both volcanoes sit at Orange Alert status. If seeing conditions are good, you can check out the eruptions on their respective webcams: Pavlof (Cold Bay - FAA) and Veniaminof (Perryville NE - FAA). You can also check out their webicorders to see the seismic activity at the volcano: Pavlof (PS4A) and Veniaminof (VNWF).