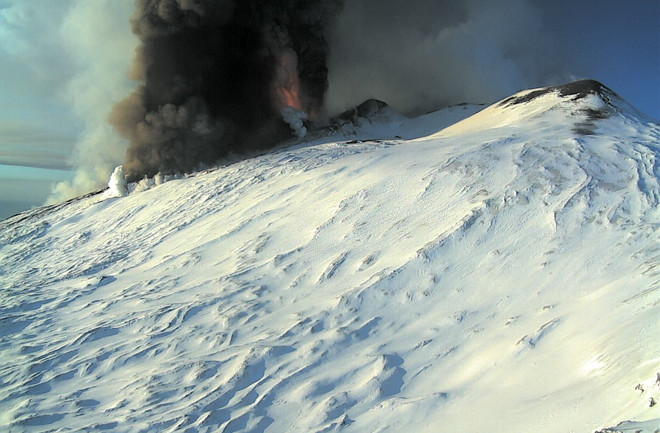 Now that we can put 2011 behind us, time to start looking at the first eruptions of 2012! Etna After taking the holidays off, Italy's Etna decided to start off 2012 with another paroxysm, this one producing an impressive eruptive plume after some smaller explosions. The eruption itself (see image above) was very similar to the paroxysms of 2011, with a mix of lava fountaining and flows - you can see it all in the timelapses of the eruption (put together by Eruptions readers) but this time we had the added bonus of significant snow on the volcano adding to the explosivity of the eruption. The eruption was vigorous enough to even grow its own small pyroclastic cone as well. As usual, Dr. Boris Behncke's Flickr stream is full of images and video from the eruption as well. Eruptions readers (and others) caught a lot of the action overnight and into the morning on the many webcams surrounding Etna. UPDATE: Check out this new video of the eruption from Etna Walk as well! Kilauea This week marks the 29th anniversary of the start of the eruption at Kilauea. Hard to believe we've almost completed 3 decades would of eruptions. The activity is still going strong according to the latest status report of the volcano from the Hawaii Volcano Observatory. Indonesia There was a statement from the PVMBG saying that out of Indonesia's 127 known active volcanoes, 7 are on alert status III (of IV), including Papadayan, Lokon-Empung, Karangetang, Ijen, Anak Krakatau, Gamalama and Lewotolo. The biggest dangers lie in an eruption of Ijen, which has over 9,000 people living close to the volcano, but Indonesian officials are also watching Lewotolo and Gamalama closely. Red Sea If you've been following the new about the eruption in the Zubair Group off the western coast of Yemen, you're going to love this new video of the eruption. It shows truly Surtseyan activity where towering black-and-white plumes (sometimes called rooster tails) are erupting from the sea, all indicating an active mixing of water and magma. This is already an island building up around the vent as the volcanic tephra piles up. It is hard to get a good sense of scale, but my guess is the plume is at least a few hundred meters tall over the sea surface. Chile I've interspersed some of the updates from this week's USGS/Smithsonian Global Volcanism Program's Weekly Volcanic Activity Report into the post above, but I wanted to also point out an eruption, or at least a plume, from Callaqui in Chile. This is one of the many volcanoes in central Chile and one that hasn't made much noise since 1980 (except for an unconfirmed explosion in 2009). However, a pilot noted an "ash plume" from the volcano last week, but nothing was noted on any satellite images of the area. Sounds like another Chilean volcano to watch over the coming months.