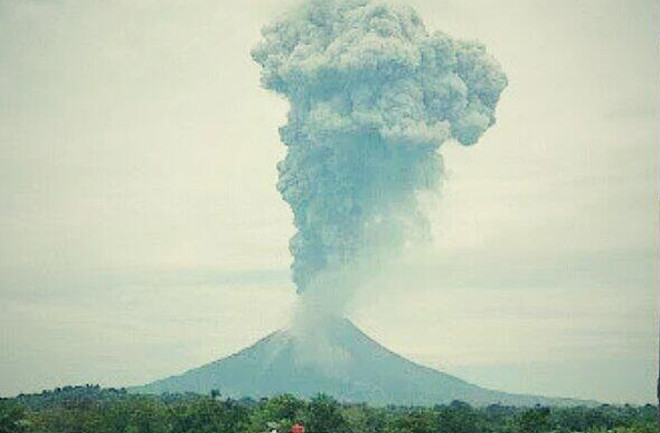 A plume of ash from the eruption of Sinabung on September 17, 2013. Image: Ririney_ / Twitter. Volcano news from around the world ... let's get started: Indonesia The activity at Sinabung continues to increase (see above), with the restless Indonesian volcano sending ash to 6 kilometers (20,000 feet) according to the latest report from the Darwin VAAC. The Jakarta Post is reporting that M.Hendrasto, the new head of the PVMBG, said that "the volcano’s lava pipe and crater had opened, so more eruptions were possible" (the Post's wording). Hard to tell if something was lost in quotation or translation, but it suggest that the PVMBG thinks that the last few days of explosion were "clearing the throat" of Sinabung and that new magma might be expected to start erupting. Culture Volcans posted a timelapse video that captured the plume from yesterday, along with what looks like either steaming debris on the slopes or small hot rockfalls downslope from the vent. Evacuations continue in the region around Sinabung, with the number of evacuees now over 6,200 people from 11 villages and these evacuation appear to already be causing humanitarian aid requests. There have also been some hospitalization due to ash inhalation from these explosions -- a serious hazard in area where people live very close to the volcano. In this BBC gallery, you can get a sense of just how close to the volcano people live at Sinabung, where the erupting vent looks like it is really just on the outskirts of the villages. Hawaii

A small earthquake swarm west of the summit caldera of Mauna, from September 5-7, 2013. Image: USGS/HVO. One piece of news that slipped by last week is a small series of earthquakes that occurred underneath Mauna Loa. Most of the earthquakes were too small to be felt, but some were as large as ~M 2.5-3. Most of the earthquakes where at a depth of ~7 km below an area to the west of Mauna Loa's summit (see right) and in a region that experienced swarms before the last two eruptions of Mauna Loa in the 1970's and 80's. That depth is in the lower crust beneath the volcano, like near the base of the oceanic plate on which the Big Island sits, suggesting magma might be moving into Mauna Loa's system. This doesn't mean an eruption is around the corner, but the volcano has been quiet since the eruptions of 1984. A study by Gonnermann and others in Nature Geosciences suggested that when Kilauea erupts, Mauna Loa is quiet and vice versa -- an interesting idea that needs a longer record of activity from both volcanoes to feel that the pattern isn't merely a recent occurrence. UPDATE: Interestingly enough (and don't make too much of this), Kilauea ocean entry and lava flows on the coastal plains seemed to have ceased this week. You can check out Kilauea's daily status here. Titan We have to move far from Earth for this next news. Data from the Cassini mission to Saturn suggests that Titan has active cryovolcanism, joining a list that has Triton and Enceladus where ice volcanism is present in the solar system. Observations of the changing surface albedo (lightness of the surface) on Titan suggested to Anezina Solomonidou and colleagues that recent cryovolcanism is occurring to resurface the moon of Saturn. This could help explain how the methane in Titan's atmosphere is replenished, from these eruptions of water, methane and other material from the liquid "oceans" that are thought to cover Titan. This builds on previous work that suggested that Titan did have cryovolcanoes, but whether they were currently active was unknown. Costa Rica Finally, OVSICORI in Costa Rica is reporting that activity (in the form of "rumbling noises" caused by rockfalls) at Arenal seems to be increasing over the past few weeks, after three years of relative quiet for the normally very active volcano. Programming note: Starting tomorrow until Sunday, I'll be off on the Geosciences Department Field Trip to the Adirondack Mountains and points in between. Back on schedule next Monday.