Eruption Started Between Barðarbunga and Askja in Iceland 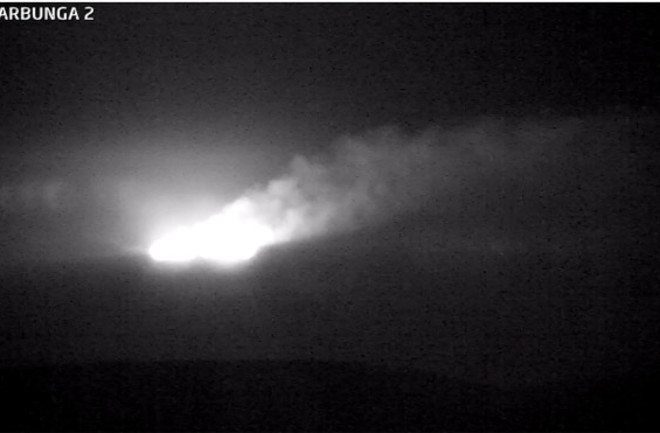 The new eruption between Barðarbunga and Askja in Iceland, seen on the Mila.us Bárðarbunga 2 webcam at 8:45 PM EDT August 28, 2014. Photo by Screen capture of Mila.is webcam. It appears that an eruption has begun in the region between Bárðarbunga and Askja, close to the northernmost point of the earthquake swarm that begun almost 2 weeks ago. This would put it within the Askja fissure zone in part called the Holuhraun Lava Field - the same place where cracks were spotted in the land surface yesterday and today. There aren't many details yet, but it looks like a basaltic fissure eruption based on the image (see above and below) on the Mila.is webcams: Bárðarbunga 1 and Barðarbunga 2. Right now it looks like the second webcam has the best view of the eruption.

The new eruption between Bárðarbunga and Askja seen from the Bárðarbunga 1 webcam on August 28, 2014. Photo by Screen capture of Mila.is webcam More details as they arrive - likely we won't know a lot more until daylight in Iceland. UPDATES9:30 PM EDT: The London VAAC reports no ash cloud detected so far from this eruption - which isn't too surprising considering it looks like a basaltic fissure eruption with fountains and lava flows rather than an explosive event. 9:45 PM EDT: Authorities in Iceland say the fissure is ~10 km north of Vatnajökull and currently measures about 100 meters long. The eruption started shortly after midnight on August 29 in Iceland. 10:15 PM EDT: From the looks of the webcam, the eruption looks to be petering out after just about 2 hours.