Eruption at Sangeang Api Grounds Flights Across Indonesia and Australia 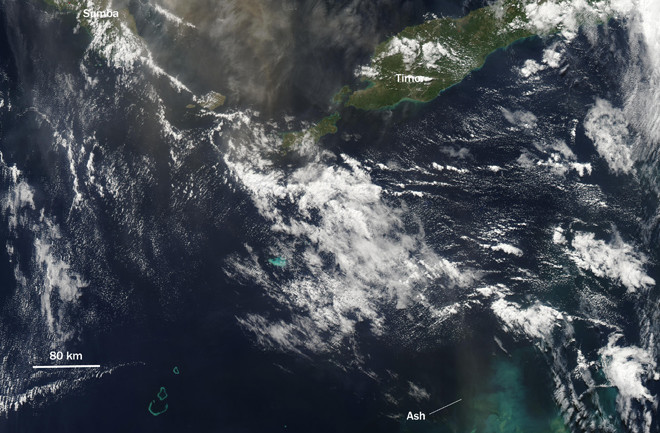 Aqua/MODIS image of the Sangeang Api ash plume, spreading to the southeast on May 31, 2014. Image: NASA. Quick update on the Sangeang Api eruption. The ash from continued explosions at the Indonesian volcano has halted flights across a swath of cities in the region, including much of Bali and south to Darwin in Australia. The plume of brown as is clearly seen in today's Aqua MODIS image (see above), spreading both to the southeast and east from the volcano - and the Darwin VAAC advisory for air travel reflects this widespread ash across many flight levels used for commercial traffic. The ash plume itself is clearly seen in the OMPS image (see below) that categorizing aerosols (like volcanic gases) in the atmosphere -- so, this suggests that there is a significant amount of new magma involved if there is a strong sulfur dioxide (and other volcanic gases) signal. You can check out an animation of the eruption starting seen via MTSAT-2 and MODIS satellite imagery as well.

OMPS atmospheric aerosol data for the May 30-31, 2014 eruption of Sangeang Api in Indonesia. Image: NASA. Luckily, no deaths have been reported from this explosive eruption from Sangeang Api. However, recent reports say that that 14 people are still missing after over 3000 were evacuated from the region. Reports from people living near the volcano say ash is falling upwards of 45 km from Sangeang Api, disrupting business across much of the Sumbawa coast. Beyond this, the eruption has been about as benign as a large explosive eruption could be. The plume from yesterday's eruption appears to have topped at ~15 km, possibly as high as 20 km -- be sure to check out this collection of images of the plume taking from a passing commercial aircraft. The latest update from the PVMBG (Center for Volcanology and Geological Hazard Mitigation) in Indonesia says the largest threat from Sangeang Api is continued explosive eruptions. However, if a dome forms in the crater, we could see the production of pyroclastic flows as well, which could have the potential to destroy much of the croplands on the island. As of May 31, there eruption is ongoing