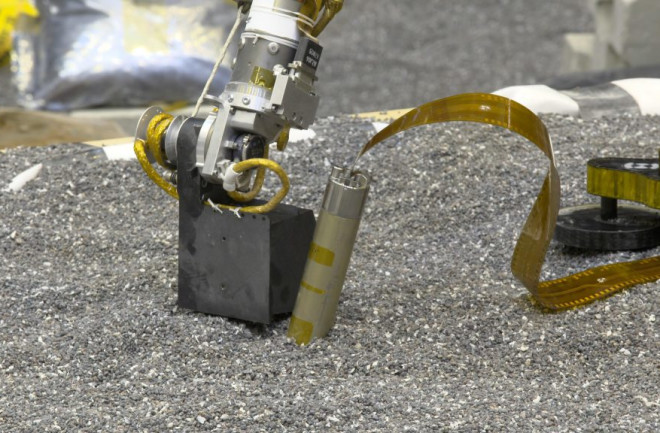 Engineers hope the real InSight on Mars can use its robotic arm to help the mole start digging again, a test that has succeeded with replica instruments on Earth. (Credit: NASA/JPL-Caltech)

The digging instrument on NASA’s Mars InSight lander has been stuck since February 28, and engineers have been hard at work trying to get it moving again. The problem is with its Heat Flow and Physical Properties Package, or HP3, and specifically the part known as the mole, which auto-hammers its way into the ground like a long spike.

The mole was designed to dig 16 feet below the surface and observe Mars’ inner heat flow. But not long after it started digging, the instrument got stuck just a foot down — far too shallow to take its intended readings. Engineers aren’t sure what caused the mole to stop, but they think the problem is in the dirt, not a mechanical problem with the device itself. And working from another planet, the problem has been hard to troubleshoot.

Engineers have been testing possible solutions with engineering models on Earth, using both a full lander model and the various pieces, like the mole and its support structure, on their own.

Now, they’ve identified the next step to take with the real InSight on Mars. They plan to use InSight’s robotic arm to lift the mole’s support structure out of the way so they can get a better look at what’s blocking the device from pushing further into the martian dirt. But this is a delicate operation. First, the arm wasn’t designed to do this work, so they had to make sure, by using the test models, that such a procedure could work. Second, if they accidentally pull the mole out along with the structure, they have no way to re-set it to digging, so HP3 would be instantly kaput.

The hope is that once the support structure is out of the way, engineers can use InSight’s camera to see what the problem is. The two main contenders are either a rock, or soft soil. Mars, as images show, is covered in rocks of many sizes, but the InSight engineers picked its location specifically to be clear of obstructions, to minimize the risk of hitting a rock too big for the mole to push past. They still think there’s only a small chance – a few percent – that a rock should sit directly underneath the mole. If it is a rock, the mole is likely stuck for good.

The other option is that the surroundings are too soft for the mole to gain any friction, which it needs to burrow into the dirt. If the soil is too sandy, the mole will bounce out again with every recoil of the hammer. If this is the problem, the engineers hope that by using the arm to press down on the dirt above the mole, they can add the needed friction to get it digging again.

The rest of InSight’s instruments are working as intended, so engineers need to be careful that anything they do to rescue the mole doesn’t cause damage to the rest of the lander. The team, which is located at both NASA’s Jet Propulsion Laboratory in California and at Germany’s Aerospace Center (DLR) are planning to start the lifting maneuver on Mars sometime in late June. It will take a week to slowly lift the support structure in a three-stage process. This is partly because of the long time delay between Mars and Earth, and also because the engineers will take pictures at every step to make sure they don’t accidentally dislodge the mole at the same time. They’ll take a few more weeks to evaluate what they learn, and they hope to decide on any next steps by mid-July.