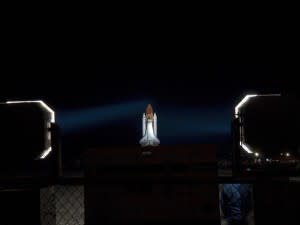 NASA has just announced that the Space Shuttle Endeavour's final flight to space will be on Friday, April 29, at 15:47 EDT (19:47 UT). This flight will be notable for several reasons, besides the obvious. For one, it will bring the Alpha Magnetic Spectrometer-2 to the station. For another, it will feature the last suite of Shuttle astronaut spacewalks; four in total. Also, the Commander is Mark Kelly, husband of Congresswoman Gabrielle Giffords who was shot in Arizona in January. There are plans for her to attend the launch, which would be very nice. I will be on travel that day (as usual, sigh) but I might be home in time to watch the flight and live tweet it. If not, stay tuned to NASA TV to watch it live. You can get more info on the Shuttle at NASA's site. After this 14 day flight, there is one more scheduled Shuttle flight: Atlantis, in June.