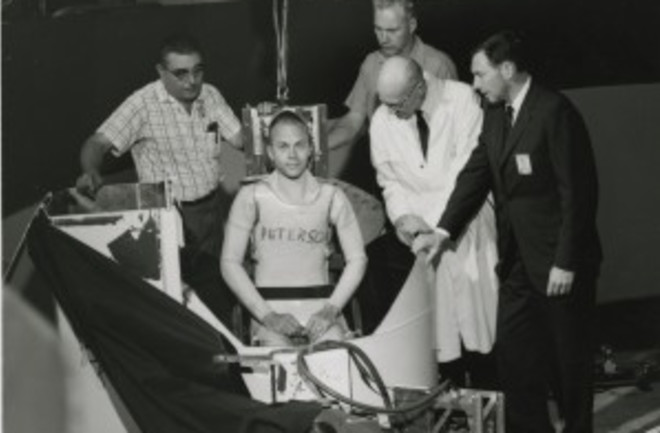 Peterson before a centrifuge test. Gallaudet University Archives. In the late 1950s when NASA was a brand new agency, the list of spaceflight unknowns was significantly larger than any list of knowns. And addressing that list called for some real creativity. When it came to dealing with space sickness, NASA turned to 11 deaf men for a baseline, and these men ultimately played a significant role in getting the first astronauts off the ground. [embed]https://www.youtube.com/watch?v=DT8-n-itEjU[/embed] This specific run of tests was done in the 1960s as a cooperative venture between NASA test was a partnership between NASA and the U.S. Naval School of Aviation Medicine. The subjects were 11 deaf men between 25 and 48 years old — Harold Domich, Robert Greenmun, Barron Gulak, Raymond Harper, Jerald Jordan, Harry Larson, David Myers, Donald Peterson, Raymond Piper, Alvin Steele, John Zakutney — from Gallaudet College (now Gallaudet University) that specializes in educational opportunities for the hearing impaired. And their selection was far from an arbitrary choice. The key here was in how each of these men lost their hearing. All but one was deaf after a childhood bout with spinal meningitis. Spinal meningitis can, among other effects, cause lasting damage to the vestibular system of the inner ear by killing nerve and hair cells, the structures that are vital to giving our brains information about motion, balance, and even spatial orientation. This is also the system that plays a huge part in for motion sickness. There are still some conflicting explanations over where motion sickness comes from, but the traditional explanation is known as the “sensory conflict theory.” This is basically a conflict to what your eyes see and what your vestibular system feels. If you’re reading in a car you won’t see any movement but your body will feel it. The result is feeling like you want to vomit. And sometimes just outright vomiting. When it comes to space, this system stops getting gravitational cues that distinguish up and down, but your eyes still see things normally. It's another set of conflicting information that can lead to a space sickness akin to seasickness. Which leads to nausea. Fun fact, "nausea" and "nautical" have the same Greek root -- "naut." That’s not a coincidence. This has clearly been a sea-faring condition for a while now. Sensory conflict theory explains why a functioning vestibular system is necessary for motion sickness, and also why NASA was interested in testing deaf individuals with a damaged vestibular system to study motion sickness in spaceflight. These men are virtually immune to motion sickness, so they could be put through the ringer on all the machines that would train astronauts for spaceflight, report any physical sensations, and give researchers a baseline without having to stop because of nausea. And the tests were insane! One test had four men spend 12 straight days inside a 20-foot slow rotation room that kept spinning at ten revolutions per minute the whole time. The disorientation would make anyone sick, but these men weren't bothered by it. Another test had them go through zero-g flights in the so-called "Vomit Comet" before scientists looked for the presence of stress hormones in their urine as an indication of stress on the body during the testing. Men who could hear had increased levels of certain catechols and steroids in their urine while the deaf participants didn't. In another test in a ferry off the coast of Nova Scotia, researchers wanted to see what would happen to the men on a boat in choppy waters. The goal was to see if the deaf participants could be made seasick to understand and determine the comparative effects in unaffected subjects, aka men who could hear. The deaf subjects played cards and hung out while 15 of the 20 hearing participants got violently ill. The deaf men only reported physical discomfort from the test as well as fear. The rough waters were so scary many feared shipwreck, but even the panic they felt wasn't strong enough to induce nausea. Researchers measured their blood pressure, eye movement, digestion, and other physiological effects for a good baseline until the tests were stopped… because the researchers were too sick to continue. Ultimately, these 11 deaf men known as the Gallaudet Eleven did a lot to help scientists understand the challenges facing humans in spaceflight. Sources: NASA; NTRS; NTRS;