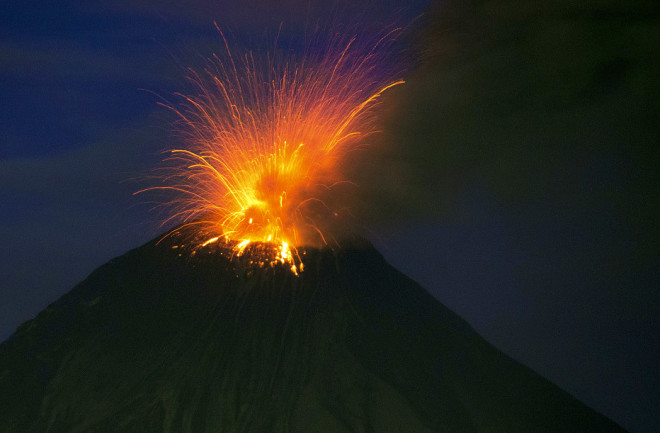 View of the Tungurahua volcano spewing lava and ashes on February 27, 2016 in Cahuaji, Chimborazo. JUAN CEVALLOS/Getty Images Time for some updates from the volcanoes of South America: EcuadorThis week has been a quite active one at Tungurahua. The Ecuadoran volcano has produced some impressive explosions that reached as high as ~7 kilometers (23,000 feet) and dusted ash across the region. A few pyroclastic flows have also been generated by this new activity, mostly heading down drainages to the northwest of the volcano. Incandescent blocks have been thrown (see below) up to a kilometer from the active crater. Volcanologists from the

Tungurahua Volcano Observatory think that these moderate explosions could go on for a while, although they mention that there is a small chance that this could be precursory activity before a new intrusion of magma that might cause a larger explosive event similar to 2006.

also remains on an elevated alert

. Chile ONEMI, the Chilean Emergency Management Agency, and the SERNAGEOMIN

, the Chilean Geological Survey, are keeping the alert status

for the restless Nevados de Chillán at yellow. Monitoring of the volcanic complex has shown some increase a small increase in seismicity related to magma possibly rising up into the system's upper reaches. Even with this, the biggest hazards are small explosions caused by water heating up at the crater and creating steam explosions. Today, the webcams pointed at Nevados de Chillan

are the other Chilean volcanoes on elevated alert status, sitting at yellow

due to continued unrest

. Colombia It is easy to forget that Nevado del Ruiz

in central Colombia is still rumbling. Just last week ash from the volcano caused some flight disruptions in and out of Manizales

. Today, a new swarm of earthquakes

was followed by a small ash burst

(see below) that reached 3 kilometers (~9,800 feet) over the volcano. Nevado del Ruiz remains at alert level Yellow III. As the latest update from the SGC

reminds us, just because the volcano has been producing this type of low to moderate eruptions for the past five years, it doesn't mean that it will always be so well behaved, so continued vigilance is necessary.