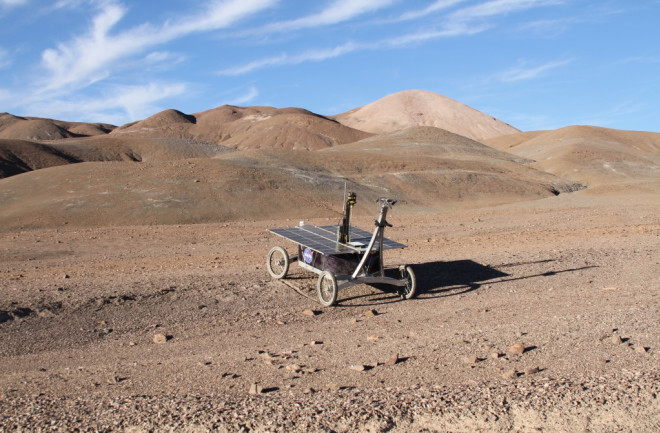 A rover in Earth’s Atacama Desert is a stand-in for current or future Mars rovers. (Credit: Prof Stephen B. Pointing)

A NASA rover deployed to Chile’s Atacama desert has discovered microbes in one of the most Mars-like environments on Earth. It could prove helpful in the search for life on Red Planet.

The life that the rover found was adapted to extremely salty environments, much like those on Mars. Scientists also say the life was patchy, which they expected and called a basic rule of ecology. That’s because nutrients and water tend to accumulate in pools. But finding that this also holds true in extreme environments like the Atacama – or Mars – is a valuable lesson.

Researchers point out that because of Mars’ harsh environment, which bathes the surface in damaging UV radiation and dries out surface water due to extreme temperatures, any potential life would almost certainly be found underground. The rover found the samples by digging up to 2 and one-half feet below the surface, as described in research published February 28 in Frontiers in Microbiology.

Researchers compared the samples the rover found to ones they uncovered by hand, and found a good match. This is seen as a good sign that such organisms can be retrieved by robotic means.

In the past, Mars soil sampling has taken place closer to the surface, but future missions do plan to look underground. This finding might mean that future Mars rovers have to sample many different sites in order to find signs of life, thanks to its patchy nature.

But it’s still good news for the upcoming Mars 2020 rover, which plans to drill underground and collect soil samples looking for signs of past – or present – martian life.