Earth was in the crosshairs

On March 19, 2008, the Earth was caught full-on in the beam of nature's deadliest beast, a gamma-ray burst.

Lucky for us, the GRB was far away-- far, far away: 7.5 billion light years distant, literally more than halfway across the visible Universe. Had we been much, much closer, like a thousand light years away, the energy from the beam would have torn our atmosphere away, boiled our oceans, and irradiated the planet with a million times the lethal dose of high-energy gamma and X-rays. Gamma-ray bursts (GRBs) are scary, scary, scary. But it wasn't that close; it was a million times farther away than the lethal distance (in fact, all GRBs are really far away, and so pose little real danger to us here on Earth). All we saw was a flash of light -- actually, a flash of gamma rays, detected by NASA's remarkable Swift satellite, designed to do this very task. But what a flash! Even from that terrible distance, the amount of light the GRB gave off made it visible, briefly, to the naked eye! 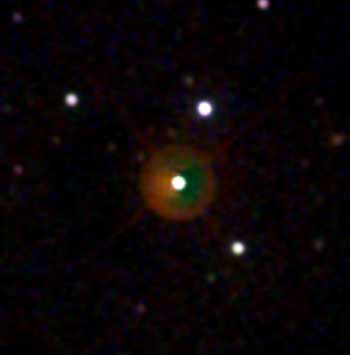 A GRB is born in the fury of an exploding massive star, when its core collapses into a black hole. A vast amount of energy is released, more than the Sun's entire lifetime's output. A hellish mix of forces focuses, squeezes this exploding energy and matter into beams, extremely narrow cones of emission, cosmic blowtorches which march across space. If you are too close, and in the path of a beam, well, saying "you're toast" doesn't quite cover it. But if the beam misses you, you don't get the gigantic burst of light; the energy drops of very rapidly if the aim of the GRB is off. Even a miss by a fraction of a degree is enough to change its apparent brightness hugely. Scientists making models of GRBs had an idea that this narrow, intense beam is inside a wider, mushier beam of energy. It's easier to get hit by by the wider beam (like you don't have to aim a shotgun as carefully as you do a rifle), and so the idea is that what we see from almost all detected GRBs is this wide beam. Actually being in the path of the narrow beam would be very rare. And that's what makes GRB 080319B (the second GRB seen on March 19, 2008), so remarkable: it was aimed squarely at us, and we were bathed by light from the narrow beam. We were looking right down the monster's throat. The beam was incredibly tight; only about 0.4 degrees wide (take a look at a protractor to get an idea of how skinny this is). Had the beam been aimed just a scosh off, just a tad, the GRB would have appeared far, far dimmer. We still would have seen it, but it would have looked like just another GRB, and not the single most luminous event ever witnessed by humans. Probably all GRBs have this narrow beam, but they miss us, so we don't see them. And because the beam is so narrow, scientists say that this sort of thing would happen once a decade or so. Good thing we had Swift running at the time! Swift was able to detect the burst, then rapidly (within seconds) send the news to observatories all over (and above) the planet, so that they could instantly follow up with their own observations. This allowed astronomers to detect the burst at a wide range of wavelengths (radio, infrared, optical, ultraviolet, X-ray and gamma ray), which is critical: it gives us insight into how the beams are formed. That in turn tells us about how the black hole formed, how the star exploded, what sorts of material were involved, and their physical characteristics. All of this tells us more about the Universe, which is good. But it also tells us about gamma-ray bursts. And there is just something about them, something terrifying about the energy, the power, the raw fury of them, that fascinates me. They really aren't a threat to us -- we think they can only come from great distance -- but they still represent nature at its fiercest. Sometimes the pursuit of science may seem cold and emotionless, but that is far, far from truth. And like GRBs, the closer you get to the truth, the more powerful, the more energetic, and the more passionate science gets. And may I add, I have a whole chapter about these beasts in my upcoming book,Death from the Skies!, which is available for pre-order on amazon.com. 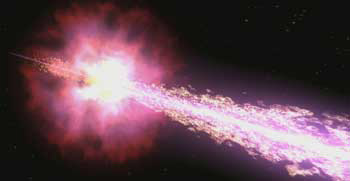 Artist's impression of a GRB. Click for a way cool animation. Courtesy NASA.