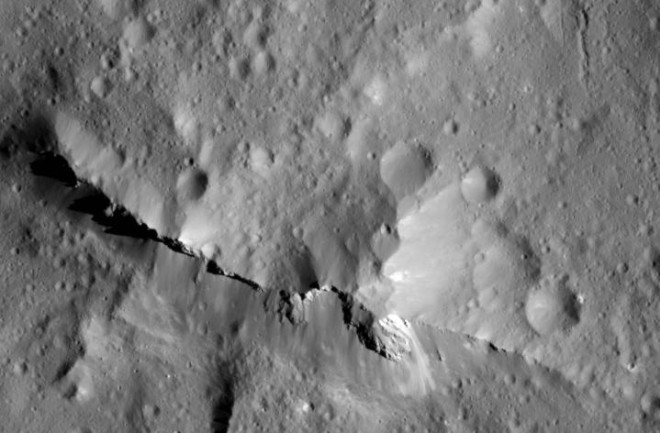 NASA's Dawn spacecraft captured this image of the central peak of the Urvara impact crater on Ceres. This terrain contains products of rock-water interactions like carbonates. (Credit: NASA/JPL-Caltech/UCLA/MPS/DLR/IDA)

Data from NASA’s Dawn spacecraft show that there is an abundance of carbon on Ceres.

Dawn ended its mission on November 1, 2018. However, the spacecraft has remained in orbit around Ceres 257 million miles from Earth. Propelled by an ion engine, the craft was the first to ever visit a dwarf planet. And, in its orbit around Ceres, Dawn has now collected data that provides evidence of organic matter on the planet’s surface.

In a new study detailing these findings, a team from Texas’ Southwest Research Institute (SwRI) concluded that Ceres’ surface might have more than five times as much carbon as most carbon-rich meteorites found on Earth.

“Ceres is like a chemical factory. Among inner solar system bodies, Ceres’ has a unique mineralogy, which appears to contain up to 20 percent carbon by mass in its near surface. Our analysis shows that carbon-rich compounds are intimately mixed with products of rock-water interactions, such as clays,” SwRI’s Simone Marchi, the lead author on the paper, said in a statement.

Previous data from Dawn showed that water is present on the dwarf planet, and, in the past, chemical reactions generated when that water met rocks on the surface have generated a range of products like ammonium, phyllosilicates and carbonates. Along with magnetite, a kind of iron oxide, these things make Ceres’ surface fairly dark.

But, there was something missing from our understanding of Ceres’s surface, the SwRi researchers say. New data from Dawn indicate that amorphous carbon, a carbon-rich organic material, is likely present in significant quantities on the dwarf planet’s surface and near subsurface.

Organic materials refer to any molecule that contains carbon, which is the basis for all life as we know it.

“With these findings, Ceres has gained a pivotal role in assessing the origin, evolution and distribution of organic species across the inner solar system. One has to wonder about how this world may have driven organic chemistry pathways, and how these processes may have affected the make-up of larger planets like the Earth,” Marchi said.

The researchers still aren’t sure how Ceres got its organics: They could have either been accreted early in its formation, or acquired over time the dwarf planet was hit by meteorites.

Either way, it’s likely that Ceres saw a lot of interactions between water and its minerals at some point in the past. It’s a situation that can create conditions ideal for organic chemistry, and that has implications for theories that organic material was transported throughout the solar system by asteroids and other bodies.

This work was published in the journal Nature Astronomy.