The 3,400-year-old ruins on the former banks of the Tigris River are providing new insights into the history of the Mitanni Empire. 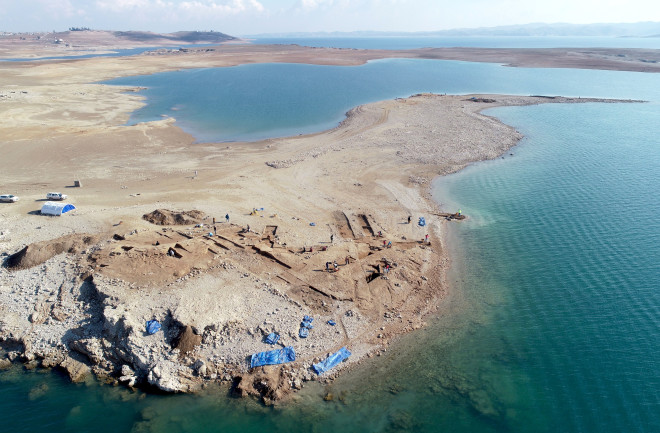 The archaeological site of Kemune, where the sunken city was found, in the dried-up area of Iraq's Mosul reservoir. (Credit: Universities of Freiburg and Tübingen, KAO)

In January of this year, prolonged drought caused the waterline in Iraq’s Mosul reservoir to sink to the lowest level since the dam’s construction in 1986. As the water sank, the 3,400-year-old ruins of an ancient city became visible along the former banks of the Tigris River. Less than two months later, the ruins were once again submerged.

But not long before the sunken city resurfaced, Kurdish archaeologist Hasam Qasim recognized the drought’s potential to reveal the ruins lurking below the water. Qasim was there when parts of the ancient city first emerged from the reservoir in 2018, another drought year. But as climate change has worsened, so has drought in Southern Iraq. And this year was particularly bad; for months beforehand, the Iraqi government had been drawing upon the reservoir's reserves to irrigate croplands downstream.

After realizing what was about to happen, Qasim quickly contacted his colleague Ivana Puljiz, an archeologist at the University of Freiburg in Germany. The scientists realized that they needed to assemble an excavation team and had very little time to act. “It was very stressful and very exciting too,” Puljiz says. “It was only an hour after Dr. Hasam called that our funding partners agreed, and we had a team within a couple of days.”

For six weeks, the team of archaeologists and photographers worked to unearth more and more of the city. They worked ten hours or more a day, rarely took days off and weathered two thunderstorms and a hailstorm. “It was exhausting,” Puljiz says. “But it was worth it.”

During the initial 2018 excavation, Puljiz and Qasim discovered a palace dating back to the Mitanni Empire, which reigned in parts of present-day Iraq, Syria and Turkey from 1550 to 1350 B.C. The palace may have been the centerpiece of a Mitanni city and economic center called Zakhiku, which is mentioned in ancient texts.

This year, the drought enabled the researchers to excavate far more of the city. What they found lends credence to the idea that the site was an important hub for the ancient empire. The 14-acre site was surrounded by fortified walls and guard towers. But the palace is not the only large structure within the city’s walls. In the southeast corner of the city, the researchers unearthed an industrial complex that may have been used to forge bronze or bitumen objects. In the northern section of the ancient city, a multi-story storage building may have housed stockpiles of grain and goods. “The size of this building indicates that the site could have been a redistribution center for the region,” Puljiz says.

Archaeologists and workers excavate the walls of a large building thought to have been used for storing grains and goods. (Credit: Universities of Freiburg and Tübingen, KAO).

The excavation has also uncovered new insights into the history of the Mitanni Empire — and its eventual decline. Around 1350 B.C., an earthquake struck the region, collapsing the upper walls and burying much of the city in debris. Soon after the earthquake, the Mitanni Empire became embroiled in a series of conflicts that resulted in the region coming under Assyrian rule. The upper layers of the ruins date back to these early years of Assyrian occupation.

During the final week of excavation, the team made a surprising discovery: Buried just a few centimeters below the surface were five large ceramic vessels. Inside, the vessels contained more than 100 clay tablets with cuneiform script scrawled across the surface. The tablets date back to the early-Assyrian era just after the earthquake. “Are they letters? Administrative texts? We don’t know yet,” Puljiz says. “We hope that they contain some reference to the history of the city, and perhaps we can also learn more about how the Assyrians spread northwards into the region.”

View into one of the pottery vessels with cuneiform tablets, including one tablet which is still in its original clay envelope (Credit: Universities of Freiburg and Tübingen, KAO).

Next, the researchers will send the tablets to professional restorers who will carefully remove sand and debris from their etched surfaces. Once they become legible, an Assyriologist — someone who specializes in the study of ancient Mesopotamia’s languages and civilizations — will attempt to translate them from ancient Akkadian.

Now, the walls of this ancient city are once again submerged beneath the water of the Mosul reservoir. This time, however, the researchers have covered the ruins in plastic sheets to buffer them from further erosion. When the waterline inevitably dips again in the future, the city will be waiting for them.