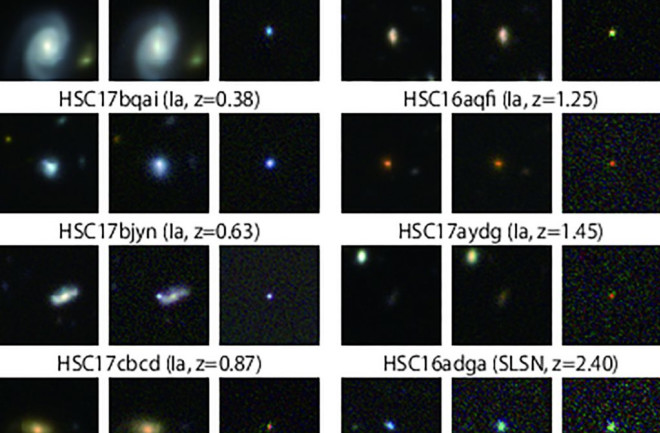 A small subset of the supernovas that Subaru discovered. Each set of three images shows (left to right) the sky before the supernova exploded, after, and the difference between the two images. (Credit: N. Yasuda et al.)

Before our solar system formed or our sun even began to shine, stars halfway across the cosmos were exploding in brilliant flashes of light called supernovas. The light from their death throes traveled for 8 billion light-years and arrived at Earth sometime in the past few years, where it struck Hawaii’s Subaru Telescope and was captured forever in images.

While nearby supernovas are bright enough for even amateur astronomers to spy, these farthest ones require more specialized equipment. Subaru, which is run by the National Astronomical Observatory of Japan, has a mirror 8.2 meters (27 feet) across, allowing it to peer into the distant universe to spy dim objects. For this study, researchers used its Hyper Suprime-Cam, a 3-ton camera taller than a person to capture the 1,824 supernovas that make up the collection.

The new supernovas are identified in a paper led by Naoki Yasuda from the Kavli Institute for the Physics and Mathematics of the Universe and published May 30 in the Publications of the Astronomical Society of Japan.

Among the collection are a special type of stellar explosion called Type Ia supernovas. Type Ia supernova are special because they always explode at the same luminosity, or intrinsic brightness. By measuring how bright they appear to Earthly eyes or telescopes, astronomers can judge how far away the explosion occurred, since more distant supernova will appear dimmer than closer ones. For this reason, they are highly valued as “standard candles,” a way to measure distance in the cosmos. The farthest sources also offer information about the expansion of the universe, a rate that has recently come under question again.

It took the Hubble Telescope nearly a decade to discover 50 of these Type Ia supernovas more distant than 8 billion light-years. Now, in just two years of observing between 2016 and 2017, the Subaru Telescope captured 58.

Subaru cast a broad net in its search, gazing at a large chunk of the night sky out to more than 8 billion light-years. The 1,824 explosions it found encompassed many different kinds of supernovas, from the special Type Ia that results when one star steals material from a companion (about 400 total, including the 58 very distant examples), to the more common explosion of a single star at the end of its lifetime.

The search also found five so-called Super Luminous Supernovas, sometimes called hypernovas. These are stellar explosions at least 10 times brighter than ordinary supernovas, and are thought to happen when a very massive star, 30 to 40 times the sun’s mass, dies. Scientists think they are one cause of high-energy gamma ray bursts, but with only a few examples so far observed, more observations are needed to understand these extreme explosions.

The large batch of new finds from Subaru should keep supernova researchers busy for quite a while, no matter what kind of stellar explosion they prefer.

Michitaro Koike, from the National Astronomical Observatory of Japan, created an interactive graphic of all 1,824 images, allowing you to zoom in and out and toggle the images to before and after the supernova occurs. Check it out!