Astronomers think they know the chemical history of the universe, more or less. In the first few minutes after the Big Bang, the story goes, more than 99 percent of the universe’s mass condensed into nuclei of hydrogen and helium, the two lightest elements; the rest became lithium, the next element in line. Because the universe was expanding rapidly, the primordial plasma quickly became too diffuse to fuse together the heavier, more complex nuclei. Those elements were made long after the Big Bang, by nuclear fusion in the hot, dense cores of stars. Later they were scattered into space by exploding supernovas.

A corollary of this story is that very old stars should consist (aside from the heavier elements being made in their hidden cores) only of the Big Bang’s products: hydrogen, helium, and a smattering of lithium. That is why recent observations made by two independent teams of astronomers are so interesting. Searching among the oldest stars in our galaxy, in the spherical halo that surrounds the Milky Way’s spiraling disk, the researchers have found at least one that contains high levels of beryllium and boron.

Beryllium and boron, the next elements after lithium in the periodic table, are special cases. Although they too are made in the cores of stars, they’re so fragile that they quickly disintegrate there. Astronomers have long assumed that the beryllium and boron seen in the atmospheres of stars must have formed not by fusion but by fission, when cosmic rays--atomic particles zipping through the galaxy at high speed-- slammed into heavier atoms in space.

But when Sean Ryan, of the University of Texas, and his associates pointed a telescope at HD 140283, an ancient star 200 light- years away, they saw ten times more beryllium than could be accounted for by the amount of cosmic rays that are coursing through our galaxy today. Meanwhile, Douglas Duncan, of the Space Telescope Science Institute, and his colleagues were pointing the Hubble Telescope at the same star. They found it contained uncommonly high levels of boron.

When Ryan and Duncan announced their results earlier this year, they favored the first possibility. We were really hoping it was the Big Bang, says Duncan, because you’d get more people interested. There’s this macho thing in astronomy, you know--the bigger the better.

Beryllium and boron coming out of the Big Bang would be a big result. It would mean that cosmologists’ standard picture of the early universe as a uniform sea of particles was wrong. To make elements heavier than lithium, the primordial stew would have to have been lumpy--dotted with dense clumps of plasma, nanostars in effect, in which the conditions for fusing heavier nuclei could have existed, if only for a few seconds.

That conclusion may still turn out to be true, but Ryan and Duncan now lean toward the second possibility: that the beryllium and boron were made by cosmic rays. The ratio of beryllium to boron in their star, it seems, matches the one physicists obtain when they simulate cosmic rays with atom smashers.

But to make the amounts of beryllium and boron seen in HD 140283, there must have been a lot of cosmic rays zipping through the interstellar cloud from which the star was born. The infant Milky Way, says Duncan, may have been a violent, star-bursting galaxy in which massive stars formed and exploded as supernovas in rapid succession, spewing out a flood of cosmic rays. These results are really the fossil evidence of the birth of our galaxy, says Duncan, and what they tell me is that something dramatic happened. Picture this big, turbulent cloud of gas collapsing, but it has all these sparklers--all these explosions going off in it.

Duncan plans to test this picture by analyzing stars even older than HD 140283. Those stars should have been born before some of the cosmic-ray-spewing explosions and so should contain less beryllium and boron. But if they contain the same amount as HD 140283, it would imply that all the old stars inherited their beryllium and boron from the Big Bang. Either way, astronomers will be rewriting the textbook: if not the story of the origin of the elements, then the tale of the Milky Way’s birth. 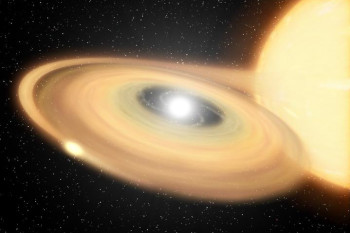