During our early childhoods, the vast majority of us are boarded by a stowaway that can stay with us for the rest of our lives. It can rear its head when we are at our weakest and it can wriggle its way down our family tree into our children and grandchildren. It’s a virus called human herpesvirus-6, or HHV-6 for short. It’s probably in your genome right now. 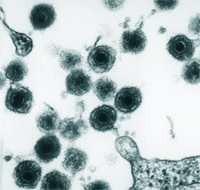 As its name suggests, HHV-6 is one of the herpesviruses. Unlike other members, it doesn’t actually cause herpes, but it is one of the most common infections in the Western world. It infiltrates the bodies of over 90% of children and it causes a near-universal disease called ‘exanthema subitum’, also known as roseola or three-day fever. The signs of infection soon clear out, but the virus stays put.

Like all herpesviruses, HHV-6 can enter a dormant phase called “latency”, where it stays in our cells after the initial infection has cleared. These stowaways can stay with us for our entire lives but they can sometimes be roused from their slumber to infect again, especially if their host’s immune system becomes compromised. HIV patients, for example, often experience recurring infections. After decades of symptomless dormancy, HHV-6’s reawakening can be severe and debilitating.

Now, Jesse Arbuckle from the University of South Florida College of Medicine has uncovered the virus’s hiding place. Most herpesviruses just leave their genome as a ring of DNA floating about in infected cells. But HHV-6 is a far sneaker infiltrator. It actually shoves its genes into the genome of its host and it targets special structures call telomeres, which sit at the ends of our chromosomes. Telomeres are like the plastic tags at the ends of your shoelaces – they stop long strands of DNA from fraying at the ends, losing valuable information and becoming incorrectly entangled.

Arbuckle worked with four families in which at least two generations had unusually high levels of HHV-6 in their blood. Some had no symptoms whatsoever, others had neurological problems. Arbuckle sampled their white blood cells and went fishing for HHV-6, using glow-in-the-dark molecules designed to recognise the virus’s DNA. When he looked for the telltale glowing dots under a microscope, he saw that every one sat at the tips of the patients’ chromosomes, and nowhere else (see below). This virus clearly specialises in breaking into telomeres.

It does it using a spot of genetic mimicry. Telomeres are incredibly monotonous and ours consist of the sequence TTAGGG repeated again and again. As it happens, HHV-6 has exactly the same sequences in its own genome, making it easy for it to sneak its sequences into ours.

In its latent state, HHV-6 can bide its time until conditions are right for its comeback debut. Arbuckle managed to trigger its re-emergence using a chemical called trichostatin A (TSA) that also reactivates other dormant herpesviruses. When he cultured cells from his infected family, he found that a dose of TSA led to rising levels of viral DNA. The latent HHV-6 genes could produce new viruses, capable of starting fresh infections.

Finding HHV-6’s hiding place is an important discovery, but there are still a lot of questions left to answer. When the virus first infects a host, what makes it smuggle its genes into telomeres, as opposed to continuing its normal infectious life cycle? Once inside, what’s the natural trigger that reactivates it? And does the presence of these viral stowaways disrupt the telomeres? The last question is particularly important – telomeres are incredibly important for protecting our DNA from harm and if problems with telomeres have been linked to both cancer and mental retardation.

The implications of HHV-6 infections become even bigger when you consider that the virus can pass down from parent to child. Arbuckle showed that family members with latent HHV-6 infections carried the same viral sequences in their telomeres. This means that once the virus finds its way into someone’s genome, it can become a genetic heirloom, unwittingly inherited from parent to child. Does the child also inherit a risk of disease, given that the virus could pop out at any time? Or do their immune systems get a benefit against other herpesviruses, given that they’ve had experience with viral sequences right from birth? Only time, and more research, will tell.

HealthHow to Make Sure You’re Wearing Your Mask Right